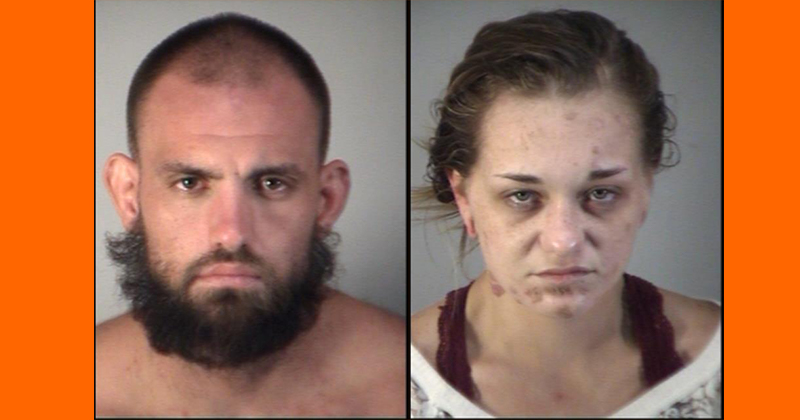 Eustis (WTFF) – Two Florida Natives were arrested for GTA and drug charges after being found sleeping in a stolen vehicle in front of someone’s home on a dirt road.

On Wednesday, some Floridian who lives on Deerwoods Dr. called 911 about a suspicious Nissan Rouge parked in front of their home. The SUV (or whatever the fuck it is) was backed up towards the fence.

A sheriff showed up and found the two sleeping. It was confirmed that the vehicle was stolen.

“It should be noted,” wrote the sheriff in the arrest affidavit, that both of them had their “seat belts fastened while sleeping.”

23-year-old Nicholas Wade was in the driver’s seat. His passenger was 20-year-old Justine Handley.

The sheriff noticed a “glass smoking device” sitting right next to them in the center console. They were both detained and the vehicle was searched.

Of course, drugs were found: methamphetamine and Alprazolam (Xanax). Also, they had some weed and a skull grinder.

The Florida man said he “wasn’t aware the vehicle was stolen,” and that the Florida woman picked him up earlier to hang out. He was “very uncooperative” and gave a lot of “vague responses,” according to the report.

The Florida woman said the Florida man had “picked her up the day prior,” and told the sheriff that “she had nothing to do with the vehicle being stolen.”

She confirmed that the crystal substance was in fact meth, but told the officer it could have something else in it. She is directly quoted as saying:

“I got really fucked up on it.”

She asked the officer if she could apologize to the car theft victim, who arrived on scene to get their Nissan back. The vehicle owner agreed. While in the back of the cop car she said, “I told him to take the truck back but he didn’t listen to me.”

The Florida pair was arrested and taken to the Lake County jail.

Both are Florida Natives.

Thank God they were wearing seat belts because they were on a trip and can’t be fined for not wearing them!