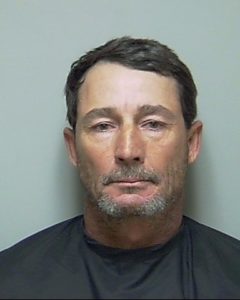 Palatka (WTFF) – A Florida man was arrested after shouting racial epithets and pointing a gun at a Floridian who was fishing nearby, according to Putnam County authorities.

The incident took place on Saturday morning at Rodman Reservoir, where the two men were fishing, according to the arrest report. Their fishing lines got tangled at one point.

48-year-old Palatka man Michael Alan Andrews called the other fisherman the N-word twice during an argument, according to witnesses.

The Floridian victim (who is black) said that Andrews got angry and began threatening him, saying that he “brings his gun for stupid people like him.” (news4jax.com)

Another man said Andrews had a gun in his right hip-holster and placed his hand on it during the argument.

The Floridian played it cool and went back to his vehicle to call 911. Andrews saw this and packed up his stuff, got in his car, and swerved toward him like he was going to hit him.

Andrews drove further down the road and stopped the car. He then pulled a gun out of his trunk and pointed it right at the frightened Floridian.

Andrews was arrested, and his two 9mm handguns were confiscated. He has been charged with Aggravated Assault with a Deadly Weapon Without Intent to Kill, a third degree felony.

What has happened to polite civility?? Why was he carrying a gun while fishing??