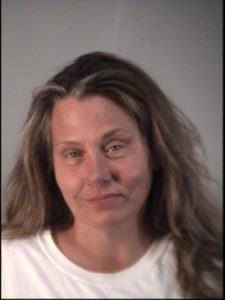 Paisley (WTFF) – A woman was arrested for allegedly striking her boyfriend because he interrupted sex to check on dinner.

Like most stories in Paisley, it involves Nascar, alcohol, and “having a good time.”

According to the Lake County Sheriff’s Office, a deputy received a call about a domestic disturbance on the evening of Feb 25. Dispatch said that the female half of the altercation was at the Paisley Mart located on C.R. 42. The boyfriend was still at their place on Pink Panther Rd.

At the Paisley Mart, 51-year-old Teresa Warren told the officer that her and her boyfriend were “drinking alcohol and having a good time,” but then suddenly out of nowhere he just punched her in the face with a closed fist. She did have a red mark on her face. She claimed that she lost consciousness and when she woke up she ran to her boyfriend’s car and left. Of course she went to Paisley Mart, because there’s really nowhere else to go out there.

Like most Florida Womans (yes it’s spelled that way because Florida Woman is a proper noun), she’s not originally from Florida. She was born in Michigan, which explains a lot.

Now to the boyfriend. He told the deputy that they were indeed “drinking alcohol, cooking, watching the Nascar race, and having a good time.” That’s definitely a sound alibi in Paisley, that’s pretty much what everyone does out there all the time.

Then according to his story per arrest affidavit, things got weird…

They started having sex but then he remembered he was cooking. He didn’t want the food to burn so he took a little break to check on the food.

Florida Woman was not having it. She smashed a T.V. onto the floor.

Her boyfriend asked what was wrong.

Instead of answering with words she just screamed and started “striking him with a closed fist in his face, head, stomach, and legs.” He pushed her out the front door and told her to leave. She just charged at him again, so he stuck his hand out to block her, creating that red mark on her left cheek with the palm of his hand. Then he said she ran off with his vehicle.

The boyfriend had a swollen left eye and a red mark on his stomach. The woman was determined to be the primary aggressor, so she was arrested on a misdemeanor battery charge and taken to the Lake County Jail.

Florida Woman beats a man for denying her sex

I believe most of you missed the point. Good thing she was not close to a gun. I dare any man to start making love to a woman and pull out He was lucky, my take he should have kept his mouth shut took a well deserved ass kicking and paid her bond.
Let me break this down for you
Satisfying your woman or burning dinner, what would you choose? Make the correct choice or we will be reading about next

Poorly written with a lot of condemnation towards simple folk who just like to have a good time without spending a lot of money. You seem shallow and insecure of your own life which is why you lash out at others in a negative way.. so sad for you…

Girls’ gotta have a leetle fun once in a bo-peepin’ sheepin’ NASCAR while, jus’ sayin’.’

That man gotta pay a little mo attention to her hot chassis, m’kay?

She may be from Michigan, but this story still gets the “Florida” tag on Fark.

That should be a Dr. Suess book