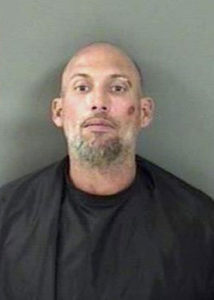 Vero Beach (WTFF) – A Florida man was arrested after reportedly yelling at people and challenging them to a fight at a Chili’s Bar & Grill on Saturday night.

43-year-old Joe Henry Babcock “appeared to be intoxicated” when deputies arrived at the Vero Beach Chili’s.

He was seen running up to to people and “trying to fight with them,” according to a report collected by Sebastian Daily.

A deputy asked for his name.

“My name is fuck you, cracker!” replied the wild Florida Man.

A couple of witnesses said he was trying to fight them in the parking lot. One said he ran up to several vehicles and struck them multiple times with his fists. The Floridians inside those vehicles did the smart thing and sped off.

“He balled his fists, bladed his body and positioned his feet in a manner consistent with someone who was going to throw a punch,” reports the deputy.

Like most Florida Mans, Babcock could barely stand up as he was yelling obscenities with slurred speech in the parking lot.

He started charging towards a deputy and was ordered to stop.

That’s when he fell down onto one knee with his hands in a prayer position and exclaimed at the top of his lungs, “I’m sorry!”

They tried to detain him, but he resisted.

He was eventually arrested and charged with Disorderly Intoxication and Resisting Arrest. He posted $1,000 bond and was released from the Indian River County Jail.