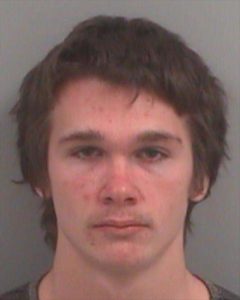 Gulfport (WTFF) – A Florida man was arrested after being accused of breaking into 13 cars in a one-block radius.

18-year-old Benjamin Langkamp Jr. was wearing a court-ordered ankle bracelet at the time, making it quite easy to catch him.

All the vehicles had their windows smashed, Tampa Bay Times reports.

He confessed to the 13 charges of vechicle burglary, as if the data from the ankle bracelet weren’t enough evidence.

For those of you who aren’t from Tampa, the term “ankle bracelet” always refers to an “ankle monitor,” a homing device that Florida Mans who are under house arrest or parole are required to wear.