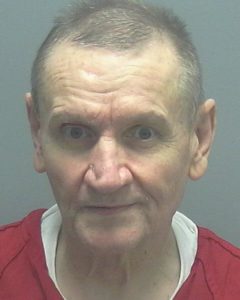 Cape Coral (WTFF) – A man was arrested for shooting a firearm inside his apartment, with bullets flying over the heads of his sleeping neighbors.

Cape Coral police showed up at the apartments on Skyline Blvd. on Feb. 18, just before 9:00 am. The couple who called said they woke up from a “loud bang” and “saw a large hole in the headboard of their bed, just over their heads.”

Tracing the bullet’s path, they found 61-year-old Ivan Bakh next door. They noticed something odd…

A large thick book was propped up on top of a shelf with several rounds penetrating it.

He even drew a target on the books in red marker.

They found a 9mm glock and bullets that matched the spent casings. Ian was arrested on charges of shooting into a dwelling and reckless discharge of a firearm in a public or private place, and taken to the Lee County Jail.

Kinda makes ya think that not everyone should own a gun, and maybe we should have actual background checks and better policies. But the gun business is very lucrative, and manufacturers don’t care what people do with their products, as long as they sell. For that reason, the NRA will continue spending millions to trick frightened people into thinking that liberals are coming to “take their guns away” every time people from either political party talk about gun law reform.