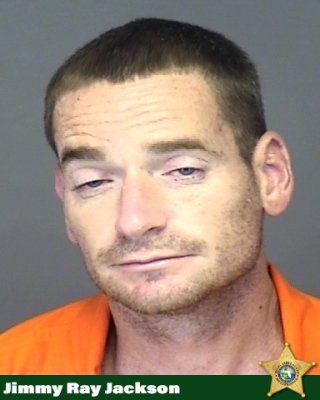 Avon Park (WTFF) – A Florida man was arrested after deputies found him sleeping inside of a vehicle full of stolen items.

36-year-old Jimmy Ray Jackson was sitting in a silver Toyota SUV off Falcon Rd around 8:30 in the morning on Friday, according to a press release.

The SUV was running and in drive.

Jimmy Jackson had gloves on. A flashlight and a screwdriver were on the seat next to him. The SUV was completely filled with items reported stolen in a series of burglaries in the area the previous night.

“More than 100 items — ranging from an empty bottle of cologne and a pack of Q-tips to jewelry, cash, an air compressor and a youth football jersey — were recovered from the stolen SUV.”

Cops also found some weed and made a cute joke about it in their news article, saying that it “may explain Jackson’s mid-crime spree snooze.”

Turns out the SUV was stolen too. It was returned to the owner.

More charges are expected to be filed.

If you live in the area and suddenly realize you’re missing stuff, call Det. Melissa Lander at 863-402-7250 or email [email protected] so you can get it back.

Florida Woman stabs her electrocuted boyfriend, tells cops a ‘black man with a mohawk’ did it

All in Highlands County