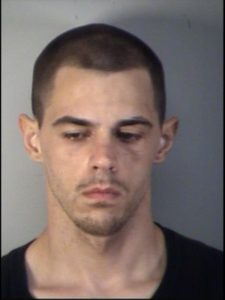 Mount Dora (WTFF) – A Florida man was arrested on Thursday after reportedly tossing spaghetti on his mom and shoving her through a wall.

It was around 3:00 in the morning when a Mount Dora police officer responded to a 911 call for help.

The corporal spoke to the victim, the Florida Man’s mother.

She told police that her son Brandon Ogden was staying at her house tonight. He was staying there because his grandfather, who he was living with, filed an injunction against him.

The 26-year-old Idaho-born Florida Man stole ten dollars from his mom and left the home earlier that evening, according to the arrest affidavit. He returned later and his mom made him some spaghetti because he was “calm and collective.”

He then “became irate” when his mom mentioned the stolen money. She also told cops that her son was “coming off of heroin and was acting irrational.”

“Brandon then tossed spaghetti on” his mother and “shoved her through a wall,” causing a small laceration.

He told her “that demons were in his head causing him to attack her.”

She went into another room and locked him out.

The confused creature then “kicked the door down” and took all his stuff, which probably doesn’t have much value. He fled on foot.

Cops found him “sitting on a trailer” on his mom’s property and arrested him.

In the holding cell, Brandon said he wasn’t sure “why his mother is using him as a punching bag,” also stating that there have been “issues at the home and that his mother was in the process of getting evicted.”

In his version of the story, he made the spaghetti for his mom.

She confronted him about a “tarot card” that he stole, said the Florida Man, and he was “surprised,” because he doesn’t even look “like he played with tarot cards.”

They found a syringe, a silver spoon, a baggie, and a medicine vial full of pills under the trailer he was sitting on during the arrest. When asked about those found items, he “mumbled something about the needle” and said about the baggie: “it could have been from a while ago and he did not know.”

Wtf dude we all know she’s crazy. It’s her fault he is like that anyways. She was and will always be a P.O.S… trust me I know , she’s the phsyco

This was on my birthday lol

This is a mental health issue, not simply food. The title, like most “news” is miss leading at best.

10,00p dollers u just made his life worse I think ppl around him are testing him none attentionaly but look what it creates

This is why you don’t do drugs kids