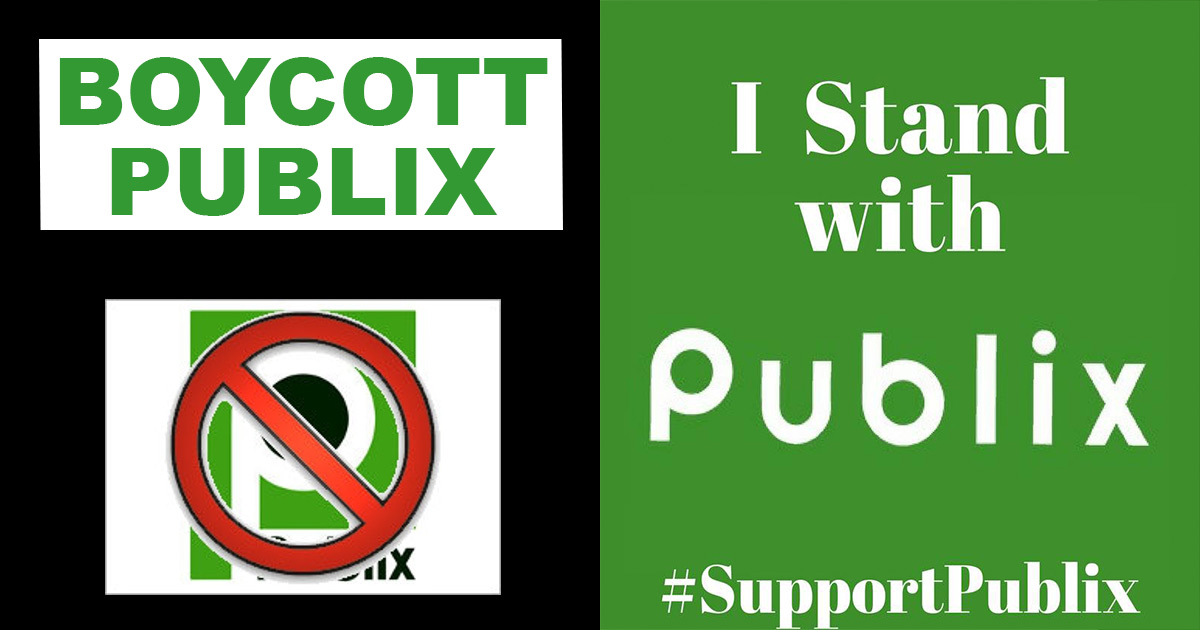 The Internet (WTFF) – A post aiming to radicalize Publix fans was made by the CEO of a digital media marketing company, and is going somewhat viral.

Pub Sub Culture is real in Florida. There are people who represent Publix, like “throw up your P’s” represent… many are victims of marketing, and many simply love Publix because it’s a fun Florida trope. These Floridians believe that Publix is a lifestyle, and not just a grocery store that also treats employees like shit. Just because you’re happy with your little manager position and meager stock options, doesn’t mean everyone is. There are good reasons to boycott Publix.

Publix isn’t all bad though. We have a whole section of our website dedicated to Publix. They are a real part of Florida culture. There’s a pretty harmless and hilarious division between proponents of shopping where it’s a “pleasure,” and their enemies who shop at Winn-Dixie. So far no blood has been shed in the Great Grocery Store War of Florida. The battle never got too ugly…

Then Publix got “into politics.”

Or rather… they’ve been in politics since the very beginning, like any other corporate giant that successfully hacks the loyalist parts of the brains of a large number of consumers. Whatever happened, news got out.

Publix officially endorsed Adam Putnam, reports Florida Politics. This disturbed many Floridians. Adam Putnam is not a fan of the cannabis, making it pretty easy for most Floridians to low-key hate him.

Adam Putnam’s angle, like many in polytricks, is to excite and disturb the senses of those who feel marginalized by the “liberal elites.” That’s actually pretty easy to do, because of all the Stupid Yankee Assholes moving to Florida in droves and pissing off the Stupid Redneck Assholes. Those damn transplants come down with their smug attitude and chic foods and bug spray and complaining about the heat. Rabble rabble. To be fair though, the best New Yorkers stay in New York City and the Florida Mans move down here to invade our lovely swamps.

Publix should’ve known what they were signing up for. Those who drink the political kool-aid never give it a rest.

Suddenly a post from Chrissanne Long showed up with a #SupportPublix tag.

The post got over 22,000 shares so far. Of course, Fox gobbled the story up to regurgitate the frenzy of emotions back to their shared customer base.

The original poster is the CEO at Maximize Digital Media, according to her profile. This meme could have been a genuine whim of her swayed Publix-loving heart, or it could be a paid guerrilla marketing ad.

Anything is possible these days.

At least 3,500 “memes” were purchased to divide America, according to federal indictments. It kinda worked.

There are many minds dedicated to exploiting the power of memes. Jeff Giesea said it’s time to start embracing “memetic warfare” in 2015. It’s 2018 now and yes, memes are serious business.

Then David Hogg got involved. He pisses off a lot of the “Murica” types who need a “fall guy” to blame for the entire gun-grabbing movement. Our 2nd Amendment rights could very well be under attack, but the NRA keeps adjusting their crosshairs of blame as money is made. They even hired Oliver North to be their next President. In an almost comical move, they hire a man who illegally sold weapons to Iranians during the 80s in the Iran–Contra affair. It’s like they’re trying to excite people, this isn’t even satire.

David hosted a “die-in” at the grocery store and tweeted, “Anyone who supports an NRA sellout is an NRA sellout.” He encouraged people to “to stop shopping at Publix until they pull their endorsement of Putnam publicly.”

Every ad you see purchases your attention. These people wouldn’t buy your attention unless it changed your behavior into a form they want. These ads work.

Publix later apologized, sort of. They wrote in a news release:

“We would never knowingly disappoint our customers or the communities we serve. As a result, we decided earlier this week to suspend corporate-funded political contributions as we re-evaluate our giving processes.”

So basically, back to the drawing board for their methods of bribing politicians for corporate favors.

They’re going to “re-evaluate” their “giving processes,” which probably means they won’t do it so publicly anymore. Companies like these have ways around public records, due to the sheer number of smaller corporations they own.

The media is having a field-day with this story, so be on the lookout for manipulated emotions. Remember that not all gun owners are viscous child killers, and not all liberals are trying to take your guns away. The truth is most of us have the same common goals and ideals, but we’re so stirred up by the billions of dollars of marketing propaganda that we can’t see it.

Everyone please just shut the fuck up and be decent to each other.

Or stop giving all your money to corporations that don’t care about you.

[…] are generally outside of the United States. They are hired by many people and corporations, from Publix to politicians, and everything in between. It is essentially “marketing” in our current […]

Sonny, this is not up to your usual journalistic excellence. You sort of blame everyone and offer no solution. According to this argument, no matter what you do, or believe, you are a sucker. That’s a bit defeatist and demoralizing.

While I am a fellow skeptic and realist, there are still times when one principle is more important than others and you can still support someone who you don’t agree with on every issue. Gun rights are a BIG deal to many of us, and they trump other smaller issues. Stand with Publix is a good thing. It is a way for the conservative gun owners to fight back in a fight where the gun grabbers are making the most noise right now.

Companies like Publix will blow whichever way the wind blows, we know that. They have no moral or ethical stance, they go where the money is – and if they sense that money will be lost by taking a moral stand, they will fold faster than a pair of twos in a world poker tournament. (I just made that tripe up.)

We need to let these companies know that we are out there, in large numbers, and we will vote with our money too. The liberals have successfully used the power of the internet to make small numbers look much larger than they are to force change. We need to fight back. Stand with Publix is a good thing.

You're going to boycott Publix?

[…] In response to this article: Publix Engages in Memetic Warfare […]

P all the way! Love Publix!!