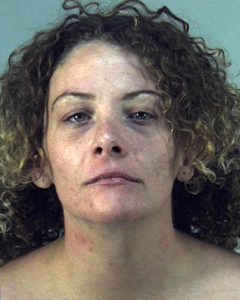 LEESBURG – Police on Wednesday arrested a woman who was apparently high on methamphetamine and running around naked in her neighbor’s yard.

According to an arrest affidavit, police received a call that the woman, later identified as Mandy Deane Jones, 36, of Leesburg, was running around without clothes, had flagged down a passing SUV and jumped in the back seat. By the time officers arrived, Jones was running around shirtless in the yard of her neighbor’s Layton Street home.

The driver of the SUV said Jones stopped her, slammed herself on the hood of the car and then opened the door and jumped in the back before she could lock it. The woman said Jones lunged for her purse but instead grabbed a water bottle, then jumped of the car.

Paramedics who arrived at the scene said Jones admitted she had taken methamphetamine in the last two hours.

Jones was charged with burglary of a conveyance and petty theft. She was taken to Florida Hospital Waterman.

Just another day in the middle of Florida…