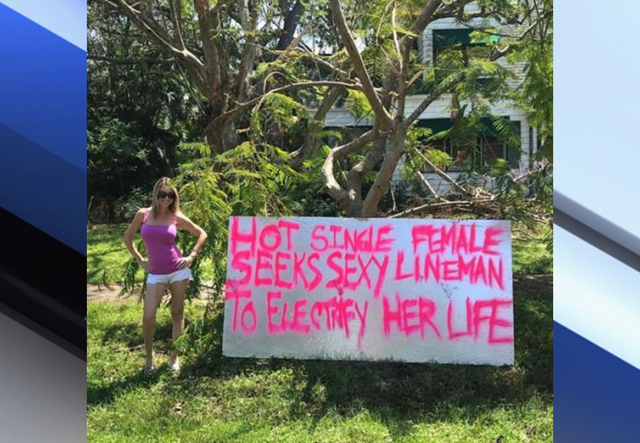 FORT MYERS, Fla. — A Florida woman got creative with spare spray paint and plywood and made a sign to get the power company’s attention.

“I thought that all of my neighbors would get a huge kick out of it,” said Kynse Agles.

She posed for a photo next to her pink sign that reads, “Hot single female seeks sexy lineman to electrify her life.”

Just days before she posted the sign outside her Fort Myers Home, Agles went under the knife for a kidney transplant. “My hurricane story started with a double organ transplant at Tampa General Hospital,” she said.

Agles had to stay in air conditioning in order to avoid complications from her procedure. “I found a place to stay that had electricity and have been jumping from bed to couch,” she said.

Then a lightbulb went off in her head.

“I saw a post on Facebook and I thought it was really funny and I can do it better,” she said. “I just thought maybe if a lineman got to my neighborhood they’ll laugh and hook me up first,” she added.

Her sign did catch the attention of linemen. After they restored her power, they took a picture behind the sign and left a note.

“Big shout-out for everyone who is working to get the power restored, because it’s so hot out there,” she said.

She’s just happy not have to ride any more couches.

“I haven’t slept in my bed in twenty nights, so I’m really excited to sleep tonight,” she said.

Agles might even loan it to some of her other neighbors who are still without power. “My neighbor across the street doesn’t have power yet, I told him he can borrow my sign later.”