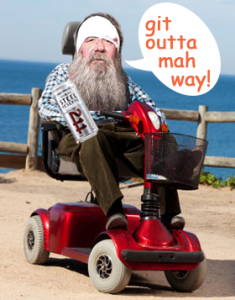 They see me rollin’…

Meet Ronny Scott Hicks. Age 54. Extensive DUI record. This man was arrested on a bridge in Palm Bay and charged with a DUI… in his motorized wheelchair. This happened in the middle of the night, when the freaks come out.

According to the police, he was blocking several lanes of traffic on this bridge, and reeked of alcohol. After refusing to take a field sobriety test he was arrested. These cops also offered to get him treatment for the mysterious head wound that he had wrapped up, but he refused help.

With two DUI’s in 2013 and one in 1998, this man is no stranger to boozed up joy rides. His past convictions don’t mention if he was driving a wheelchair or not though…

There exists a $5,000 bond, so if you need a great chauffeur who works hard even when he has an open, leaking wound on his head, release this man and hire him immediately. This is truly a dedicated driver.

So for today’s WTF Florida we celebrate Ronny Hicks for blocking traffic in his motorized wheelchair on a busy bridge. And of course he was piss drunk, how else could this happen?

We need to make this website hugely famous and start collecting donations to bail guys like this out. He’s probably mentally insane and just needs help. Maybe he could work for WTF Florida? as a contributor…