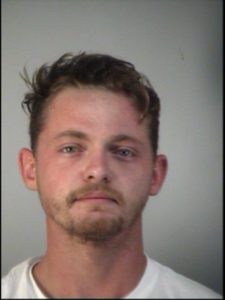 Groveland (WTFF) –  A Florida man driving around with no pants and no license is facing several drug charges.

On Wednesday around 6 in the morning, a blue BMW drove west across 50. The plate matched that of 21-year-old Brandon Haselue, who had a suspended license from a DUI incident on the 7th, according to the arrest affidavit.

The Florida man lit a “new cigarette” as he got pulled over. He was in the driveway of his home residence.

The Groveland P.D. officer could smell burnt weed as he approached.  The cop asked if he had a license.

Brandon was not wearing any pants.

He told the cop that his father was driving, and he was just sitting in the vehicle. Brandon was sitting in the driver’s seat, pantsless, when he said this. No other people were in the BMW, reportedly. The cop spoke with the father who said he was not driving, but rather “just getting the trash” when the cop saw him out walking around earlier.

The Florida Native was detained.

The hood of the car was hot. “It should be noted,” reads the report, “there was a cold bottle of Pepsi in a Walmart bag in the passenger seat,” along with some shake, cocaine, meth and a scale.

His pants were there too in the passenger seat. Inside was his wallet with some debit cards inside.

Brandon invoked his right to remain silent, and was arrested on charges of Driving While License Suspended (for a previous DUI), and one Possession charge each of Meth, Cocaine and Paraphernalia. He bonded out for $15,000 the next day and awaits his trial on September 17.

no its not greg

According to the Police Officer, he did or did not actually see this young man driving?