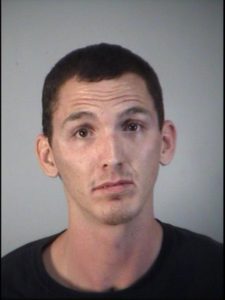 Clermont (WTFF) – A Central Florida man was arrested after he allegedly pulled a knife out and threatened people at a Waffle House.

26-year-old Donald Degrave is facing two charges of Aggravated Assault with a Deadly Weapon Without Intent to Kill. He was arrested Tuesday morning, April 17, 2018, at around 4:00 in the morning.

Per the arrest affidavit, he was hanging out behind the Waffle House on 720 Cagan View Rd. drinking alcohol with one of his soon-to-be victims. Degrave told the other guy that “he wanted to ‘hit on’ one of the female servers.”

The other guy told him to “leave the server alone,” and Degrave argued with him and pulled out a black pocket knife which he pointed at the victim.

Degrave then allegedly threatened the life of both him and the waitress.

The “argument ended” and the victim “returned to his seat inside the restaurant to inform the female server” about what Degrave was saying outside.

Another argument broke out, and finally Degrave left the restaurant.

The enraged Florida Man kicked the store window as he left, and then got on his bike and peddled away.

Several witnesses agreed that he was “loud and obnoxious” and pulled a knife out as described by the victims. All of them described the Florida Man as a “tall white male, wearing a black shirt, glasses, and red pajama pants.”

Deputies located Degrave at his home on Winding Water Way and arrested him.

Degrave is originally from the hillbilly state of Pennsylvania, where many Florida Mans are born.

This is my birthday day in saying this in 2020

thats me in 8 yers

This was on my birthday last year .o.

Oof on my 12th birthday

Oof on my bday

This happened on my b’day last year

Happened on my 25 birthday

This happened on my 13th birthday, dang.

this happened on my 12th birthday… wtf florida… murica bout to yeet dat state out of here.

Even if you told me if I move to Florida I would be able to fly, even if you told me that I would be able to sleep with Kate Upton if I met her in Florida, even if you told me I would be the smartest person in the world if I moved to Florida, still, STILL none of that would ever be enough to get to me to even visit that shit hole state, that boil on the ball sack of satan. You know what Florida looks like, it looks like the flaccid penis of America, people who live in Florida are the stupidest people I have ever had the displeasure of knowing. Florida is the type of state where only idiots live, Florida is the reason children get cancer, Florida is the reason America does so poorly in academics around the world, this one stupid state drags our entire system down. FLORIDA SITS ON GIANT DICKS AND SPINS FOR FUN….I’ve said it once and I’ll say it to the day I die…FUCK FLORIDA HAHAHAHAHA

Even if Jesus Christ himself came down from heaven and told everybody he would take them with him to heaven, all they have to do is meet him in Florida, I would happily go to hell

Maybe born in the “Hillbilly” state of PA, but lives in the most deranged, psychotic, moronic, idiotic and please God let this state fall into the ocean and spare CA…state. Florida is the worst you couldn’t pay me to live there, you couldn’t threaten my family with enough violence to live in that state. Even if I had stage four cancer and you told me I would be cured if I moved to Florida, I would make my peace and die happily…FUCK FLORIDA YOU’RE STATE SUCKS DONKEY BALLS HAHAHAHAHAHA

Never trust sites like this. They twist shit around to make their money. Greedy bastards you are

Don’t share a story if you don’t know the full story. This why America is screwed. Cause of people making stuff like this up. Ridiculous