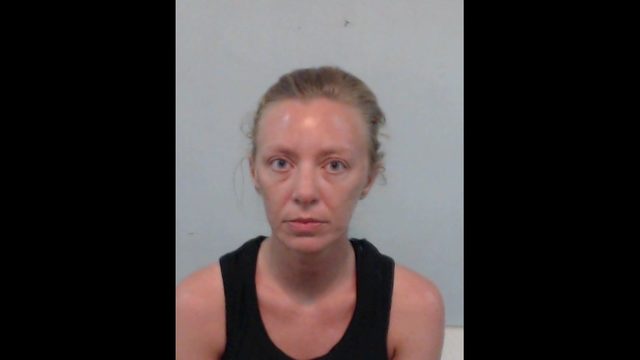 Columbia County (WTFF) – A Florida woman was arrested after failing to appear in court for an aggravated battery charge.

In October, 35-year-old Kimberly Dunn reportedly shot her ex-husband in the testicles after he tried taking an A/C unit from her home.

The estranged husband showed up with his brother at the Florida Woman’s home to pick up the cooling machine, reports Action News Jax. She was trying to sell it on Facebook.

The Florida pair were going through a divorce at the time, if that wasn’t already obvious.

Florida Woman was not having it. She sat on the A/C unit, pulled out a pink stun gun and tried to zap her Florida Man. Then she pulled out a gun.

Her ex punched her in the head. BOOSH!

She dropped the taser and the handgun.

Still full of fight, she scrambled up, grabbed the gun, and shot that AC-stealing fucker in the balls. POW!

His brother pushed the enraged Florida Woman down and screamed “you shot my brother!” while he choked her until she blacked out.

The ex-husband brought the gun with him to the hospital.

The Florida Woman was arrested that same day and taken to the Columbia County jail.

She said she didn’t mean to shoot him and was only trying to scare him.

It was not reported whether both of his balls were blown the fuck off, or if one of his gonads remains.

He should’ve weaved and Bobbitt!

The moral of the story is dont steal your xwife ac,

He shall be known as lance one testicle

I bet after that he felt a breeze

All in Columbia County