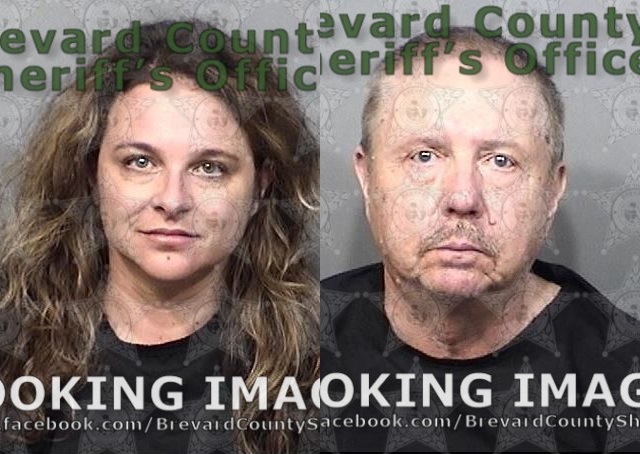 Cape Canaveral (WTFF) – A Florida woman was arrested after allegedly giving her step-father a handjob/blowjob in public on a park bench. He was arrested too.

On Saturday, just before 9 p.m., Brevard County Sheriff’s deputies showed up at Manatee Park. Somebody (obviously not a real Floridian) complained about a woman performing oral sex on a man.

According to Brevard Times, deputies saw three families and small children walking around. Note to the tourists: this is Florida, keep your rugrats inside after the sun goes down.

39-year-old Mandi Falconer, of Cocoa, was sitting on the ground in front of him. Her hands were on his penis of course.

The couple was taken to the Brevard County Jail. They’re both facing charges of lewd and lascivious acts.

Robert is a registered Republican, the party of decency and morality, according to the constituents. Editor’s note: Democrats are just as perverted, as all humans are. According to Bill Clinton, getting a BJ doesn’t qualify as having “sexual relations.” We really need a third political party that is honest about impulses, but then all the irony would be lost, and Old Media would have to find new ways to polarize, distract, and entertain.

Public sex isn’t uncommon here in the Funshine State. Earlier this year, Brevard Times broke the story when Bad Girls reality TV star Nicole Vargas was arrested for allegedly performing oral sex on a man in public in Cape Canaveral and later beating a witness who complained of the public display. Nicole’s from New Jersey, one of the birthplaces of Florida Woman.

WTFF News: Fuckery you can count on.

I wish I could get a current address on these two, I would like to invite them to thanksgiving dinner. It would make my family look ALMOST normal !!!!

OH ease up, I know where I will get my next hair cut now! A little off the top and a happy ending please! How much extra is that going to cost me? Or do I just throw in an extra tip?

OH THAT HO ?!? SHE’LL FUCK ANYTHING THAT MOVES! DIDN’T REALIZE SHE WOULD TAKE IT THAT FAR! DAMN!

OMFG! This Woman has cut my sons hair at the Hair Cuttery on Clear lake Rd in Cocoa! He comes off a bit arrogant sometimes, but he is just shy. She kept trying to engage him in conversation, which otherwise would be normal but he usually just tells people he is not in to small talk and they let it go. She got all defensive and asked him what his Dad did for a living, as if he was just being a snooty kid. Now I wonder WHAT WAS SHE THINKING!?!?

People, this is a serious case of erectile disfunction caused by the extreme heat in Florida. The only known treatment is mouth to penis blowing, in order to pump it back up before the sun rises, or one of the parties sobers up. The most unusual fact is that it must be done by someone you know. If immediate action is not delivered in time, the man can be left with a nonfunctioning tool for the rest of his life. Since it is not safe to drive, swim or operate a phone during this time, what else could they do? I am sure that now that her Mother and the general public understands the facts, we can put this to rest. This was an act of horrific heroism on her part; plain and simple. I am sure they celebrate this awkward moment at all Family functions and recognize her courage to perform this meaningful and self deprecating act in the name of her parents future happiness. Luckily, she was above age and the only children that may be scarred by this incident belong to the several tourist families watching. Since the police say they saw them “in passing” on the way to the location, hopefully they will believe she was “napping” in his lap, it was getting dark after all…

Totally missed this when it happened. I worked with her too. But unlike the girls below, I am not surprised. She walked around like everyone was beneath her and like she was blowing everyone! Not just the boss… Just sayin’…

Whose better? Me or mom??

I used to work with Mandi, I hope she finds her way.

Maybe he was getting a blumpkin without the toilet