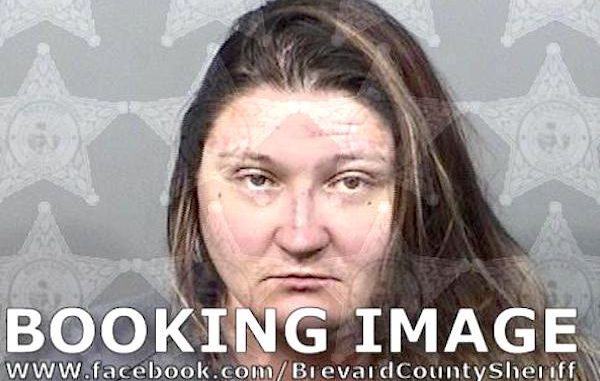 Cops showed up around 3:00 a.m. at On The Rocks on Babcock Street and met 32-year-old Jane Marie Rome.

Like most Florida Womans, she had no shirt on and appeared to be heavily intoxicated. She was actually the one who called the cops after getting into an argument with a friend who told her to stop drinking.

According to Palm Bay Daily, she was walking around through the parking lot screaming. She fell down several times. The officers asked her why she called 911.

“Freedom of speak, fucker!” was her response.

An officer asked her how much she had to to drink, and she replied, “a lot, asshole!”

The officer reports: “While speaking to Jane, she started to walk toward the roadway. I told Jane to stay out of the roadway and she fell to the ground again.”

The deranged Florida woman picked up a piece of asphalt and threatened to throw it at the cops.

“You better not touch or I will hit you,” she told the cops, reportedly.

She was arrested and taken to the Brevard County jail with a $1,500 bond.