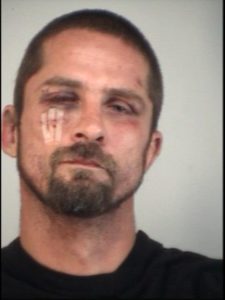 Umatilla (WTFF) – A Florida man who was drunkenly riding his bike with no lights in the middle of the road at night was arrested after allegedly attacking an automobile driver who complained.

38-year-old Eustis-born Wilmur Miles was riding his bike home while holding a beer can on the night of April 5. According to the arrest affidavit, his bike had no lights. He was only a block away from home when a Floridian driving a vehicle told him to get out of the road so he wouldn’t get hit.

The driver had his family with him, and when he returned home, Florida Man Wilmur “jumped off of the bike and started yelling and cursing at him.” Wilmur reportedly ran onto the driver’s property and threw a punch.

Of course, he missed.

The Floridian driver then defended himself and punched the Florida Man in the face. He was able to secure Wilmur until police arrived.

The Florida man advised cops that he drank two four packs already. His version of the story was a little different. He claimed that he was yelling at the Floridian for driving too fast, and followed him home to confront him about his speeding.

Wilmur was arrested and charged with Disorderly Intoxication in a Public Place Causing Disturbance. He remains in the Lake County jail with a $500 bond.