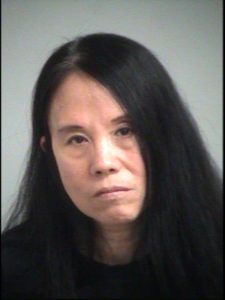 Clermont (WTFF) – A Florida woman in a hurry to “go pee pee” was arrested after allegedly getting out of her car and cursing at a cop during a traffic stop.

55-year-old Shuqing Li was driving her Toyota on April 6 at about 1:00 in the morning on Northridge Blvd., according to the arrest affidavit. A Clermont police officer noticed that she did not come to a complete stop at a 4-way stop sign. That’s how most people drive in Florida, but it’s still technically against the law to simply tap your brakes and coast through stop signs (even when nobody else is around).

The cop pulled her over and found that her vehicle registration was expired.

She told the cop she had to “go pee pee,” and was on her way home from work, but she did at least “slow down” instead of making a complete stop at the 4-way stop sign.

A citation was written for the expired tag and she became “very upset,” and said the cop was wrong. Learning that the citation was $166, she “became very irate.”

According the report, she stated that people who pay taxes should not be ticketed. She also said that the only reason she was getting a citation was because she was Asian.

At one point, she took off her seat belt and turned to yell at the cop. The officer simply handed her the citation and told her to drive safely. The officer went back to their patrol car and sat down.

Then Li stormed out of her vehicle. That was a pivotal moment in her becoming Florida Woman and catching a charge. While the cop was sitting in their patrol vehicle, she ran up to the open driver’s door and continued screaming. She ignored verbal commands to return to her vehicle, and was arrested as a result.

Li was charged with Resisting an Officer Without Violence, and stayed in the Lake County jail for almost 12 hours before being released.