To keep the pressure on, we have decided to start a petition, demanding the perpetrators of this violent act serve jail time and pay 1000 hours of community service to Manatee County, under the supervision and coordination of the Florida Fish and Wildlife Conservation Commission:

Sign this petition to put them at the mercy of the FWC.

Update September 26, 2017: A month after delivering our petition, we still haven’t received a single reply. No charges have been pressed.

The internet moves at light speed, while the law moves at a snail’s pace… this contrast is causing a palpable frustration. To be fair, the case only opened a week ago (July 26th, 2017). A week on the internet is like a year, and in that week’s time thousands have expressed their concern demanding that justice be served. A week in law is well… like a single second. This is still a very new case, and the FWC needs time to “mind their p’s and q’s” as they fill out paperwork and file an official indictment. If they present the case sloppily, it doesn’t stand a chance in court. As for now, the best way you can help is to email any evidence not yet circulating the net to [email protected]

Statement from the FWC and Manatee County State Attorney’s Office

We spoke to someone at the FWC and they told us they are building their case and gathering evidence. They are just as upset about this as us. While they cannot officially release the names, they do know who the perpetrators are. We will let everyone know as soon as the FWC indicts them, but please be patient until then.

Some protests have interrupted MTV from filming ‘Siesta Key.’

Still awaiting email replies from the FWC and Governor Rick Scott. So far neither have responded to us.

Scott did make a public statement about the incident, but no clear course of action was spoken of. He did indicate that some laws needed to adjusted when he wrote, “I know that FWC law enforcement works to protect all of Florida’s wildlife and we need to make certain they have the tools to ensure Florida has the best fisheries in the world.”

Gov. Rick Scott sent a letter to the Florida Fish and Wildlife Conservation Commission Friday saying he wants to make sure the state’s fishing regulations and statutes strictly prohibited “such inhumane acts.” (washingtonpost.com)

UPDATE: We were pretty excited to find out that our petition made it to over 2,000 signatures already… especially since we found out via the Miami Herald! Let’s keep circulating this. Thank you everyone who shared and signed. UPDATE: The New York Post also provided a link to our petition on their article. Over 7,500 people have signed so far. UPDATE: Whoah! We got over 25,000 signatures now! UPDATE: 44,136 supporters and rising!!!

So who are these knuckleheads?

Local news and online commenters have identified two of the men as Michael Wenzel and Robert Lee “Bo” Benac.

Another is MTV’s ‘Siesta Key’ star, and son of the producer, Alex Kompothecras.

He has a long history of wildlife abuse:

We submitted this information to the FWC and they replied to us via email:

We have already received this information and it is currently being investigated. Case number FWSW17OFF012872.

His accomplice (in this incident and others) is Robert Lee “Bo” Benac.

This photo was posted by a Facebook user hoping to spread awareness of their animal cruelty:

E. Jon Weiffenbach, an attorney said to be representing all the men on the boat, told ABC Action News, “None of the individuals in the video have been charged criminally and no one has been arrested.”

Alex Kompothecras is allegedly the one filming. His dad, Gary Kompothecras (who made all his money with his 1-800-ASK-GARY) co-produced the scripted reality TV show “Siesta Key” starring his son Alex.

Apparently, Michael Wenzel sent this video to a crass Facebook page, featuring him pouring beer into the gills of a living creature: 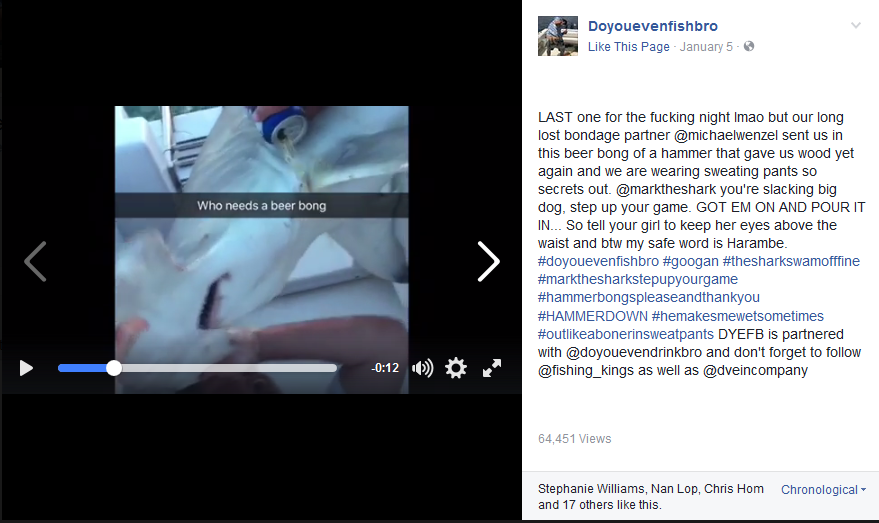 We have uploaded it here as well, in case they delete it:

The difficult part now is legally prosecuting them for animal abuse… some of their parents are politicians and lawyers, which protects them under the unwritten “good ‘ol boys” rule of the south. Police have not yet issued arrest warrants for animal abuse, and it seems there are no plans to indict them.

Michael Wenzel’s father works for Manatee County as the Planning Section Manager of Development Services. You may call Robert Wenzel at 941-748-4501 Ext. 6845 to express your concern, or email him at [email protected]

The only way they will pay for this cruel act of torture is if we constantly remind their protectors that we want justice. These tortuous acts indicate a psychotic behavior that must be dealt with before they start torturing people rather than animals.

One of the other guys apologized.

Michael Wenzer seems to be the ring leader, here’s  one of the accomplices apologizing: 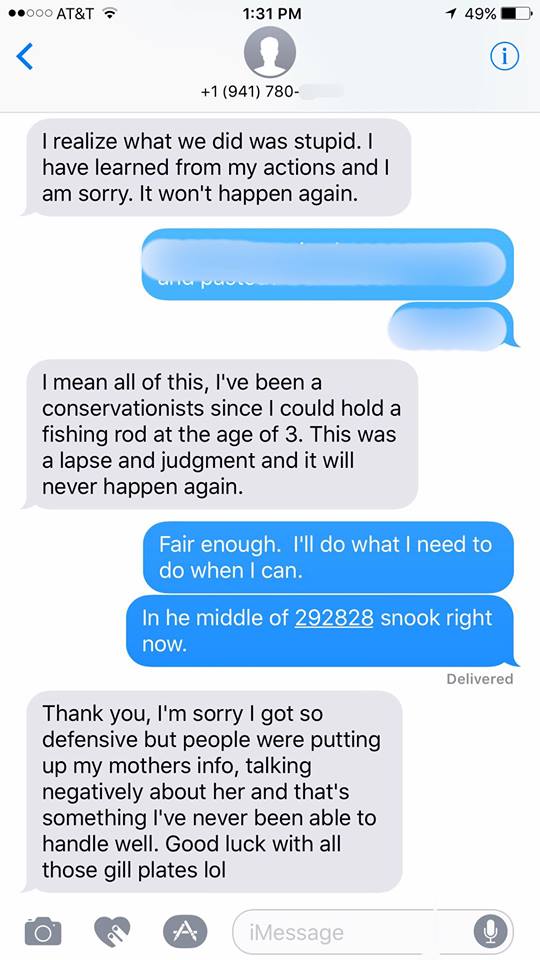 “The FWC was alerted to a video by a web tip on July 24 which is circulating on multiple social media sites showing a group of individuals traveling at high speed on the water dragging a shark behind the vessel.

The FWC takes this very seriously and is currently investigating this incident. The FWC has identified the individuals in the video, and would like to thank the public for their assistance. Per normal protocol, while this investigation is ongoing, the agency will not be confirming the identities of the individuals involved.

Anyone with additional information about this incident is asked to contact the FWC’s Wildlife Alert Hotline at 888-404-3922 or [email protected]MyFWC.com. Individuals can remain anonymous.

It is too early to speculate as to what, if any, violations took place in this incident. However, the FWC would like to state that that the lack of respect shown in this video for our precious natural resources is disheartening and disturbing, and is not representative of conservation-minded anglers around the world.”

He is well-known for his animal cruelty

One of the tippers mentioned that the “FWC is already aware. In fact, everyone in the fishing community within the Tampa bay area knows about this guy.” 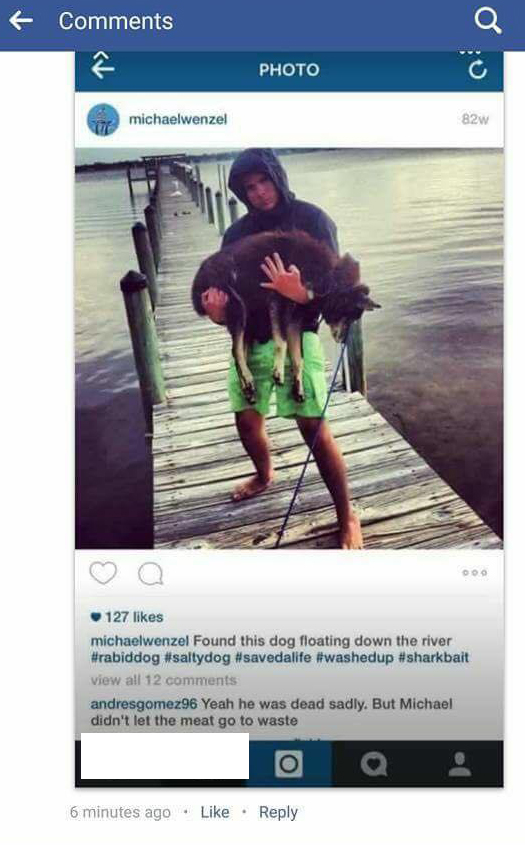 People really came together to locate this man and his friends. Below are several screenshots that are circulating the net. 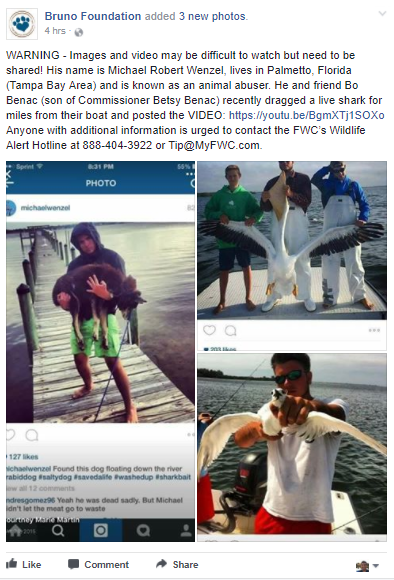 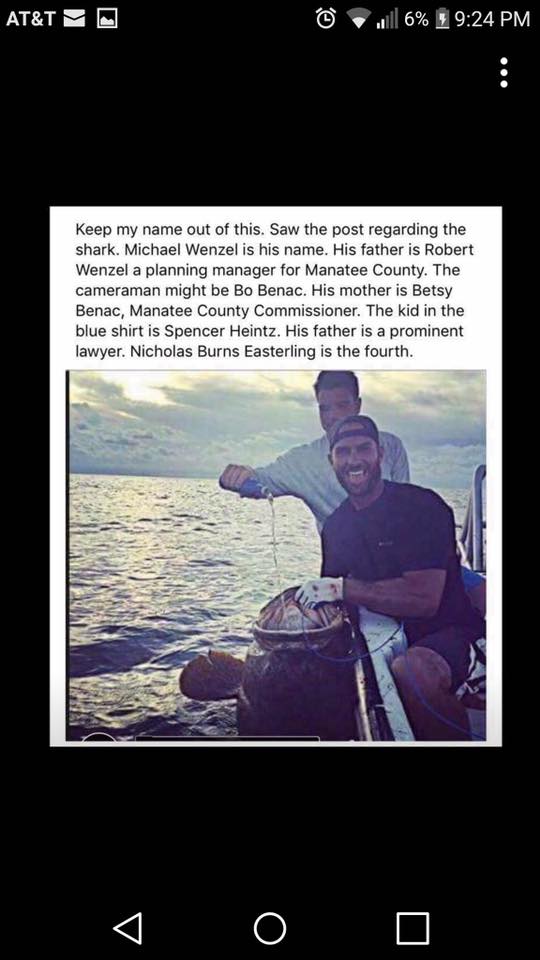 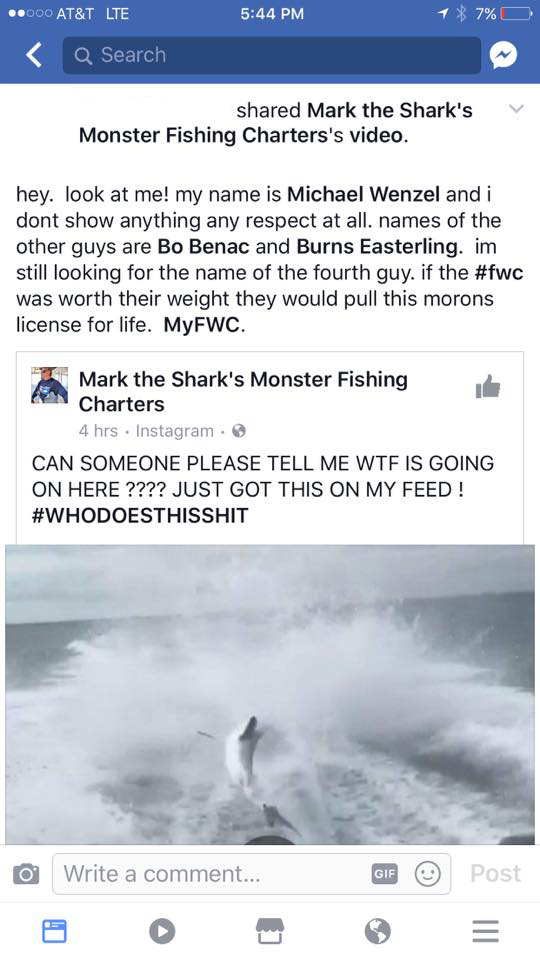 The Florida Fish and Wildlife Conservation Commission has been alerted to a video circulating on multiple social media sites showing a group of individuals traveling at high speed on the water dragging a shark behind the vessel.

“The FWC takes this very seriously and is currently investigating this incident. We are also attempting to identify the individuals in the video and where it took place.”

It is too early to speculate as to what, if any, violations took place in this incident, Klepper said.

The video has gone viral across social media sites, and is eliciting many comments from disgusted viewers.

Those with tips about the incident can contact the Florida Fish and Wildlife Conservation Commission (and remain anonymous) at 888-404-3922 and [email protected].

Sign this petition to put them at the mercy of the FWC.

I would gladly kill every one of these sick motherfuckers.

Net Neutrality was Slashed and Florida's Done Nothing About It - WTFFlorida.com

[…] all our efforts to indict the men who were torturing marine life? It took a lot of internet muscle to get over a quarter of a million signatures to indict them, and […]

Net Neutrality was Slashed and Florida's Taking it like a Little Bitch - WTFFlorida.com

[…] all our efforts to indict the men who were torturing marine life? It took a lot of internet muscle to get over a quarter of a million signatures to indict them, and […]

[…] – Ed Brodsky of the 12th Judicial Court states that many of the violations in the “shark-dragging” case may have occurred in Hillsborough County. As a result, the FWC will be working with […]

[…] targeting North Florida. Perhaps they gave up on the southwestern zone because of the whole Shark Case fiasco. Advertisers tend to bail out when your show stars animal abusers. You can still sign up for […]

[…] that’s a huge issue and we aren’t quite ready to battle this one (still working on the shark case as our first effort). In the mean time, dear Florida people, please lock up your guns when not […]

[…] that’s a huge issue and we aren’t quite ready to battle this one (still working on the shark case as our first effort). In the mean time, dear Florida people, please lock up your guns when not […]

[…] show, and has so far escaped animal abuse charges that should have been brought against him and his friends for the sadistic torturing of marine life which they have been enjoying for many […]

[…] case you live under a rock and haven’t heard about the shark case, we are boycotting these sponsors of a show that ridicules Florida and stars a man who tortures […]

[…] NEWS: Assistant State Attorney Andrew Van Sickle has been assigned to the ‘shark‘ case. He states that lots of violations have been uncovered and lots more are coming. They […]

[…] gills. He’s friends with Michael Wenzel, and was allegedly the one who filmed the infamous shark torture video. He supposedly got some death threats because of his actions. He later deleted the photos from […]

[…] Rector said he believes the same crew was responsible for dragging a shark behind a speeding boat. […]

What Would Shark Boi Say? - WTFFlorida.com

[…] the dead Shark Boi could speak, what do you think he would tell […]

[…] keep the pressure on. One of the guys on the show (the producer’s son) is friend’s with Michael Wenzel, the infamous animal torturer. F*ck MTV and f*ck their stupid […]

[…] keep the pressure on. One of the guys on the show (the producer’s son) is friend’s with Michael Wenzel, the infamous animal torturer. Fuck MTV and fuck their stupid […]

Pensacola Man rents his home for $250 on Craigslist

FWC is still gathering evidence about the shark incident - WTFFlorida.com

[…] public information officer for the FWC told us they are working diligently on the infamous shark torture case. They are deeply upset over this incident, and are just as disgusted by these photos and […]

[…] Boaters drag a tormented shark around while laughing […]

[…] The sons of prominent Floridians who tortured a sea animal on video are still evading charges. The FWC has failed to indict them, and has not responded to our open letter asking why. Meanwhile, as our petition grows online, the awesome people of Sarasota showed support in person. WTF Florida and 50,000+ other people say thank you. […]

[…] we can make a difference. Florida’s a fucked up place. From shark torturers to angry ex-cops to Zimmerman to horse fuckers, we have plenty of issues. WTF Florida is your […]

[…] He also mentioned that even though he went through 16 stages of Shark Heaven and became enlightened and able to forgive his enemies, that us humans down here need to keep pursuing legal action against his killers. […]

[…] are doing a little seance to summon the deceased Shark Boi to speak with us. We are going to ask Yemayá for some help… she’s usually pretty close […]

[…] Shark Boi: Boaters drag a tormented shark around while laughing […]