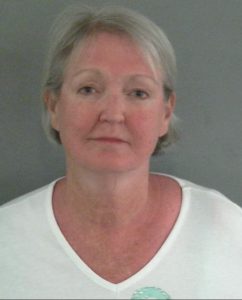 A Villager who admitted to drinking wine at a community pool was arrested after a wild ride in her golf cart Tuesday afternoon in the Village of St. Charles.

Joyce Hellkamp Smith, 62, of the Village of St. Charles, had been at the wheel of a green golf cart at about 2 p.m. when someone reported the golf cart was hitting curbs, driving in and out of the golf cart lane and driving in front of oncoming vehicles, according to an arrest report from the Sumter County Sheriff’s Office. The golf cart then drove through someone’s yard on Baldwin Run. The witness was blocking Smith’s golf cart when a deputy arrived on the scene.

Smith admitted she had consumed “some wine” and the deputy spotted a cardboard 1-liter wine container inside a compartment on the dashboard. The deputy also observed numerous green leaves and sticks on the floorboard of the golf cart, leading the deputy to believe Smith had recently hit a bush.

Smith told the deputy she lived around the corner and wanted to go home.

“Do we have to do this?” she asked, in an illuminating moment of old people privilege.

EMS arrived on the scene and determined Smith’s blood sugar levels and other vitals were normal.

She was arrested on a charge of driving under the influence and booked at the Sumter County Detention Center. She was released after posting $500 bond.