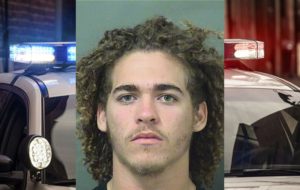 PALM SPRINGS – A man was holding his son in mid-November at his Palm Springs home when five people pulled up in a dark-colored sedan, he told village police.

More than a month later, Joseph Montag was arrested on armed robbery, aggravated assault and grand theft charges in the November robbery.

In December, village police met with local law-enforcement officials about that robbery and others throughout the county, records show. Some were similar, records state, and Palm Beach County Sheriff’s Office identified Joseph Montag as a potential suspect in the Palm Springs incident.
ADVERTISING

Police met with the victim, who identified Montag in a photo lineup as the man who’d held him at gunpoint and said: “Run the chain.”

Montag was arrested Tuesday afternoon in the robbery, records show. He is being held without bond in the Palm Beach County Jail.

His only criminal conviction in Palm Beach County is driving without a license, records show.