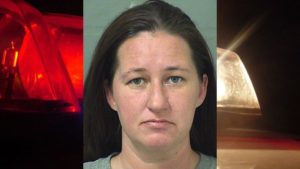 So the 36-year-old Jupiter woman grabbed a dagger late Tuesday, threatened to cut the Polish dumplings out of her brother’s stomach and stabbed the hood of a truck, town police said.

Mandy Rounds is facing an aggravated assault charge. She was released from the Palm Beach County Jail early Thursday on a $1,500 bond, records show.

The man told police they were at their mother’s home off Old Dixie Highway south of Indiantown Road at about 11 Tuesday night. The argument over the dumplings started inside the house and trailed outside, where several other family members were, the man told police.

Rounds carried a large dagger outside and hurled profanities and threats at the man, police records show. Then she stabbed the front right portion of a gray pickup where the man’s girlfriend was sitting.

Police found Rounds walking about one-half mile from the home shortly after the incident, records show. The dagger was recovered in her room at the home, police said.

The man decline to press charges against Rounds for the reported vandalism to the truck.