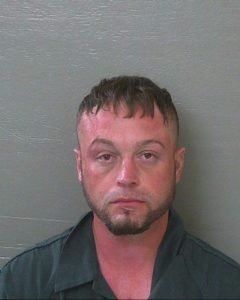 Pensacola (WTFF) – A drunk, shirtless Florida Man reportedly broke into several homes looking for a fight. He eventually ran into a fence and knocked himself out.

32-year-old Christopher Doyle Norman was arrested and charged with several offenses, including home invasion, battery, burglary, larceny and criminal mischief, according to PNJ.

He allegedly started his redneck rampage by kicking in a gate on Langley Avenue and approaching a woman sitting outside her trailer home. He punched her in the head. Then he damaged a ladder and the exterior door to her mobile home.

The sun-burnt creature moved on to the next trailer.

One resident armed himself with a hammer and yelled at the Florida Man to “leave!”

The drunken creature left, while screaming that he would “come back and burn the trailer down!”

He went to an apartment complex and knocked on a random door. When the resident opened their door, the shirtless Norman yelled at the resident to “fight him.” The resident declined. Norman tried ramming the door open, but was too drunk and weak to get in.

Moving on, he found an unlocked residence, went inside and started chasing two men around a table. He wasn’t fast enough to catch them, so he threw a lamp and missed.

Then he grabbed a slice of pizza before chasing one of the victims into a bedroom. The victim was trying to call 911 when Norman snatched the landline from him and swung the phone at his head several times, hitting him once.

Norman chased the terrified victim outside and eventually ran into a chain fence, knocking himself out.

Deputies said that he seemed to be under the influence of “alcohol,” a legal drug that evokes special Florida powers.

Crack ANY part (door or window) of my house and your wellbeing and health is instantly in jeopardy. NOBODY has ANY “right” to intrude into ANY other residence, for ANY reason!

Proud to announce I am born and raised in Pensacola. This is the dating pool ladies. Welcome to the panhandle.