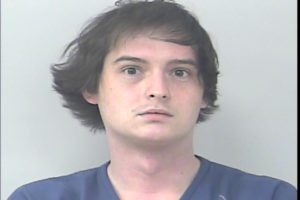 Port St. Lucie (WTFF) – A Florida man was arrested after reportedly trying to pay for “food” from McDonald’s with some weed.

On Sunday, around 2:00 in the morning, a 23-year-old Florida Man rolled into the drive-thru at the McDonald’s on SW Port St Lucie Blvd, according to the Port St. Lucie Police Department.

In his four-door Pontiac he tried to “exchange a baggie of Marijuana for food,” according to the wage slave who refused the offer.

The Florida Man drove away.

Someone actually called the cops, apparently.

The Florida Man returned to the same drive-thru a short time later, and the cops “noticed a heavy odor of Marijuana emitting from the car.”

Police arrested him after finding about 11 grams of the medicinal plant cannabis.

The restaurant owners were not arrested for being complicit in the 374,239 deaths each year in America caused by obesity. (wvdhhr.org)

The Florida Man was charged with Possession of Marijuana under 20 grams and DUI.

He told them he did offer marijuana in exchange for food, but only as a joke.

My brother died injectng a whol marijuana a

This article was a bit extreme in slandering McDonald’s and the deaths caused by obesity but I agree with the fact that it should be legal to have cannabis and use it as it’s been infinitely proven to be healthy and cure many problems and treat others. Humans have used cannabis for over 8000 years and it’s been documented since then as a medicinal drug with 0 negative health factors. It was used as a scapegoat in the 1930s by the fbi to stay running and suppress minorities mostly Mexicans at the time and later in the diaries by Nixon to haze hippies and African Americans. It’s a joke how the country treats it the way it does.