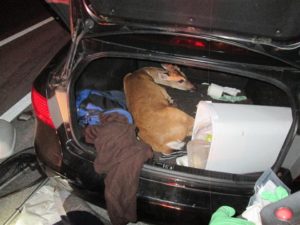 Two South Florida men accused of hog-tying three endangered Key deer in the middle of the night last month in the Lower Keys now face federal charges in addition to the state charges they were already facing.

Erik Damas Acosta, 18, of Miami Gardens and Tumani Anthony Younge, 23, of Tamarac were arrested July 2 on Little Torch Key after a Monroe County Sheriff’s Office deputy pulled them over for a traffic violation and found the deer in Damas Acosta’s four-door Hyundai Sonata, two in the back seat and one in the trunk. One of the endangered Key deer had to be euthanized days later due to a broken leg.

According to the Miami Herald, the “information” means federal prosecutors charged them, not a grand jury. They still have the option of requesting a grand jury investigate the case.

Each count carries a maximum penalty of one year in federal prison.

Third-degree felonies are punishable by five years in prison each.

“Even though they’re felony offenses, because of the way the punishment code is organized, the presumptive maximum sentence is a year in the county jail,” said Chief Monroe County Assistant State Attorney Mark Wilson.