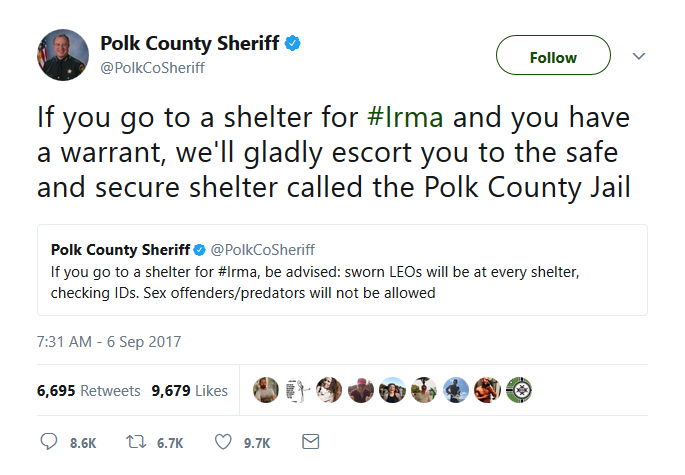 Redditor GALACTICA-Actual has a brilliant exposition on this:

I’m ex law enforcement, and yes, this was an asshole move. I don’t know anything about this guy, so I’m not going to try to speak to his motivations, but this is problematic in a few ways.

Yes, if we run someone for a warrant and they pop, we’re duty bound to arrest them. And that’s how it should be.

The problem arises that people with warrants will possibly not seek shelter and may die because of that. Warrants can be for things as minor as traffic offenses.

“Why would someone let a traffic offense go to warrant?” you ask.

Most minor warrants involve fines not paid or small stints in County. For many of these people missing that much work can cost them everything: Their place to live, food, their job. So, they take their chances, and opt for survival over paying their dues.

This is just a hard cold reality of a large portion of our population.

Next: That they will be checking I.D.s at the door. Now you’re getting into Fourth Amendment, Police State territory. This is no different than setting up random check points on the street and demanding identification from everyone who wants to pass, simply in the hope you’re going to find someone who has a warrant. There is no probable cause, and no exigent circumstance.

There is no exigent circumstance in the shelter scenario, either. There is no urgent circumstance or condition that someone having a warrant being allowed into the shelter would create. This is simply trolling. The assertion the Sheriff made, that they would be able to make the shelters safe because this would enable them to turn away sex offenders fails the test, since sex offenders don’t necessarily have warrants. The majority of them generally don’t, since a high percentage of them are on parole, and that would violate them, and they’d be back inside in a flash.

And before you say it: In the articles I read this morning, no mention was made in any of them by the Sheriff of using the Sex Offender Registry. And even if they did, unless they can provide a non custodial alternate safe place, they legally would not be able to refuse them entry.

The bottom line is this: No one deserves to die because they have a warrant for arrest. And there are people who, not only will not come, themselves, but their families will choose to stay with them. These are human beings: Flawed, yes. Some pretty bad, yes. But human beings, and now is not the time to sort it out. Not at the cost of lives.

And the unfettered assault on people’s Constitutional rights should never be tolerated, and someone sworn to uphold the laws of the land should be vigorously defending those rights.