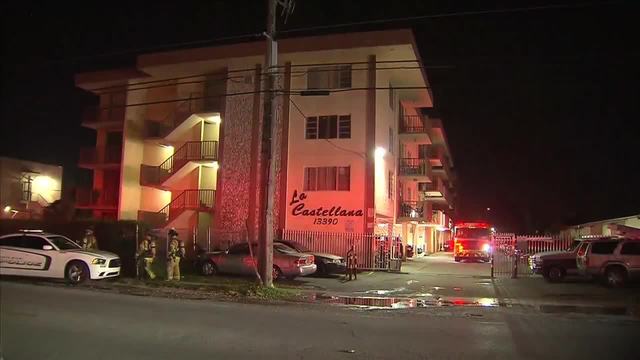 North Miami (WTFF) – A “good guy with a gun,” who thought he was protecting his apartment from burglars, shot at firefighters responding to a fire.

Local 10 reports that the fire started around 3 a.m. in the North Miami apartment complex, La Castellana.

A dryer on the second floor caught on fire, and dozens of Floridians were running away to safety.

Firefighters were going around knocking on doors looking for people stupid enough to ignore the blaring fire alarm and billowing smoke.

“We knocked, identified ourselves and, even if there’s no answer, we forced the doors, causing some damage to the doors, just to make sure that there was nobody inside of the structures.”

When the firefighters knocked on his apartment, he replied by shooting three bullets through the door. The man’s caregiver said that he believed there were robbers on the other side.

Nobody died, and nobody got hurt. Residents were able to safely return that same night, after carbon monoxide levels went down.

Because this is the Gunshine State, no charges were pressed on the man who shot his gun through a closed door because he heard noises outside.

The very first rule of the NRA’s gun safety rules is “Know your target and what is beyond.” Unfortunately though, those rules are not in our Florida Statutes, so it’s perfectly legal here shoot at anything for any reason as long as you “believe” your life is in danger.