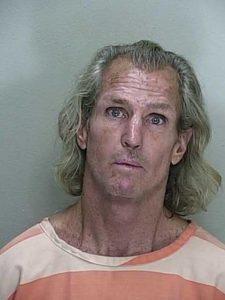 Michael Lee Britton, a 56-year-old Florida Man from Ocala, threw an Australian shepherd into oncoming traffic in 2016, according to The Miami Herald. He’s been in jail for more than a year, and will now serve two years probation.

The Ocala Star Banner reports that two vehicles hit the dog, “Yoshi,” causing internal injuries but no broken bones. Yoshi was able to run off after the incident.

Britton was living on the streets at the time. He told police that he saw an arrow in the dog’s side and he wanted to mercy kill the animal so it wouldn’t suffer anymore. An arrow wound was never found.

While it’s easy to hate him for doing this, we should remember that schizophrenia affects many homeless people, and he was very likely a victim of mental illness. The line between victims and perpetrators gets more and more muddy as we dig into the details. Just remember to be mindful and not reactionary. All we can do to make the world a better place is to do good. Being angry only adds more hostility to the world.

Cops showed up. Britton got confrontational, charged at them, and was tazed.

Bucky was removed from Britton’s custody after the incident, and adopted by Ocala Police officer Miguel Gauthier the same day. He was given the name “Bucky.”