Convinced that one of his neighbors was stealing items from his mailbox, Nicholas Dibble hatched a plot to literally catch the thief red-handed.

Dibble, a 63-year-old Floridian, suspected that his mail was swiped as retaliation by neighbors upset that he had called police about criminal activity in his Bradenton neighborhood. In an interview, Dibble referred to “the drug dealer across the street” and a woman who runs a “house of prostitution next door.”

Dibble, who is disabled, told TSG he has lived in the neighborhood for 25 years, adding that he worked nearly 40 years as a meat cutter for the Publix supermarket chain.

In what must have seemed a brilliant idea at the time, Dibble placed a mousetrap inside his mailbox (seen above) and raised the red flag. The goal, a police report notes, was “to catch someone stealing his mail.” 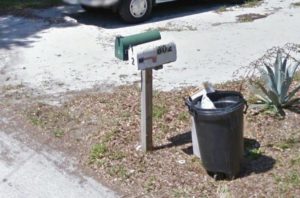 Dibble, investigators noted, “had planned to make the mail carrier aware of the trap.” However, since this is Florida, Dibble’s plan, of course, backfired.

Cynthia Humphreys-Smith, a 37-year-old postal worker, “came a different route and time” last Friday, police reported. When she reached into the mailbox to retrieve outgoing mail, “her hand slammed in the trap.” Humphreys-Smith, who suffered “pain and throbbing in the hand,” told police that her hand “had just recently healed from being broken.”

When police arrived at Dibble’s residence, he was in danger of being arrested for battery. But, Dibble said, “The sweet woman did not want to file charges against me.” Asked about the execution of his mousetrap gambit, Riddle said, “Well, it caught the wrong person.”

While not facing a criminal charge, Dibble’s mousetrap stunt resulted in a swift sanction from the United States Postal Service: Employees will no longer deliver mail to his residence.

Complaining that a lack of transportation would make it difficult for him to retrieve his mail, Dibble groused, “I am the victim.”