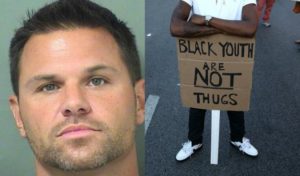 On Sunday, a Florida man was arrested outside a Publix after punching a man and then chasing three teens while shouting racial slurs.

Salvo admitted to officers that he punched the oldest and biggest of the group of teenage boys and also admitted to being in possession of a knife.

The 19-year-old who was punched reported to police that “some random guy came out of nowhere and started harassing us.” He also stated that after Salvo had punched him, Salvo pulled a knife and said, “Black lives matter, (yeah) right.”

The other two teens, aged 16 and 15, said that they thought Salvo was going to stab them. The 15-year-old said that he was arguing with his girlfriend when Salvo arrived to “pick a fight.”

A witness told police that he had seen Salvo chasing the boys with a knife while yelling the N-word at them.