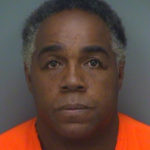 OCTOBER 5–In a scene deserving of a “Yakety Sax” score, a 350-pound Florida man ran from a Walmart with two stolen TVs, but his getaway was compromised when his pants–containing his ID–“fell off as he ran away,” according to cops who yesterday apprehended the suspect, who had a crack pipe stuffed with Brillo buried in his anus at the time of his 3:43 AM arrest.

According to court complaints, Columbus Henderson fled from a Walmart Supercenter in Fort Lauderdale on September 26 with a pair of 40-inch Hisense televisions. Henderson, seen at right, bolted with the merchandise after he allowed a cashier to scan the $298 items.

As he scooted through the parking lot, the 45-year-old Henderson’s pants “fell off as he ran away,” according to Officer Scott Brandow. It appears that after Henderson’s pants fell to his ankles, he proceeded to run right out of the garment.

It took cops about a week to catch up with Henderson, who was nabbed early Tuesday morning for grand theft, a felony.

Upon arrival at the Pinellas County jail, Henderson informed officers that he had a crack pipe concealed in his anus. “When officers removed him from the vehicle, the defendant had removed the crack pipe from his anus and dropped it on the ground,” a patrolman reported.

The glass pipe was recovered by officers who reported that it was “stuffed” with steel wool and had burn marks on one end (Henderson was charged with possession of drug paraphernalia).

Locked up in lieu of $2150 bond, Henderson has a rap sheet that includes prior busts for aggravated battery, robbery, theft, possession of drug paraphernalia, and driving without a license. (2 pages)