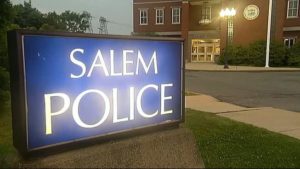 Floridians are not afraid of hurricanes… except Paul West.

Like a little bitch, he ran away when Irma announced her plans to visit. He ran all the way to Massachusetts to stay with his mommy at her house in Beverly.

These people cannot handle our people. If only they had prepared themselves first by reading our website more often…

Police received a call about a man with no pants “doing some crazy ****” out in the open.

Police found Paul with his sausage out, holding a large sex toy. When he saw the cops, he quickly reached for his pants.

He placed the sex toy safely into a plastic bag and yelled out,

“Hold on just a second, let me put my pants on.”

He was arrested and taken to the Salem police station.

Officers found several notes describing sexually explicit acts in the property they searched. They believe he was there to meet a hooker. Maybe she never showed up, and that’s why he was going solo… we may never know.

His story is that he was only there to hike. He had to pee, but was having a little trouble.

He was released on $450 bail, and is due back in court next month.