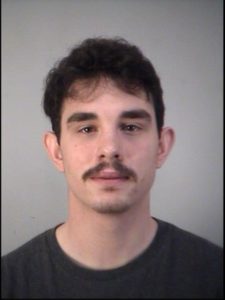 Tavares (WTFF) – A Florida man is in jail after allegedly making written threats to kill via Facebook.

On Friday morning, Michael Shipp contacted the Facebook page of the Tavares Police Department via messenger.

They browsed through the 22-year-old’s page and found “multiple posts regarding his dislike of law enforcement.” The arrest affidavit mentions our ever-important freedom of speech, but one post stuck out as particularly worrying:

“Starting to wonder why I don’t just go on a killing spree. Maybe I will.”

A friend replied, “…If you really feel this way go get some help, it’s not normal to think like that.” Shipp replied:

“Haha, it’s not normal for a police station to tell a town you’re a pedophile because they don’t like you. But it is normal to want justice and when that’s the only way, it’s the only way.”

He wrote other things like “I tried being nice. Don’t force my hand. Don’t underestimate me.” Shipp also wrote that “police are supposed to be held to a higher standard,” and they should pay “triple” in punishment for breaking the law.

Back in June he posted a very edgy, “Fuck everyone.”

He also posted a “meme” that compared Sheriff Peyton Grinnell to ISIS. The Lake County Sheriff’s Office released a video that made them “internet famous” for a bit, in case you don’t already know:

Tavares Police Department officers spoke to Shipp about the posts. He said he “knew it was wrong,” according to the report. He told the cops he was “blowing off steam” in regards to the killing spree comment.

As far as the “pedophile” remarks, well he’s not under any investigation for anything like that.

In fact, the only law enforcement involvement he’s had was for careless driving last year.

He told cops that “years ago when he was 16” he showed a co-worker at Publix a picture of a girl he dated. The girl was wearing a bra in the photo.

The Publix co-worker called him a “pedophile” for that.

His parents said he’s bipolar and has been to Lifestream before. Basically Lifestream’s a halfway house, or “a behavioral health and social services organization that provides high-quality treatment, education, care management, rehabilitation, child welfare, primary care and homeless services to children, adolescents, and adults,” as described artfully on their website.

He’s on medication but “doesn’t like it,” so he hasn’t been taking it for the past several months.

His grandparents said he’s threatened violence and to kill his own mother, which is why he no longer lives with her.

His stepfather said that Shipp’s stopped taking his medication, and also stopped going to counseling. “At one point Mr. Shipp complained of hearing voices over a NY police scanner advising him that he was a pedophile.” His grandparents believe he was “going through some sort of a ‘mental breakdown'” during that time.

He was born in New York, which would normally earn him only the editorial honorific, “Transplant.” Given the fact that he worked at Publix at one time in his life, he has earned the “Floridian” title, and now, because of his legal trouble, “Florida Man.”

Shipp was taken to the Lake County Jail for written threats to kill.

It was requested that he be Baker Acted and court-ordered to take his medication.

Freedom of Speech versus Death Threats