Mount Dora (WTFF) – The “Starry Night” mural painted on a home in artsy Mount Dora is further under attack by the city.

On Thursday, Mount Dora Code Enforcement Magistrate David Tegeler, an attorney from Pennsylvania who now lives in Winter Park, lifted the 31-day cap on the daily fines for having such a mural. City officials met with him inside council chambers at Mount Dora City Hall to retroactively extend the $100 a day fines.

As a result, the homeowners now owe over $8,000 and will continue to be fined $100 every day (reduced from $250 per day in December). Nancy Nemhauser and artist Ludomir Jastrzebski told Local 10 they’ve been fighting the city for months to keep the mural. Mount Dora officials claim that it’s an “illegal sign” and say it violates city code under the “Signs” ordinance. Keep in mind, this is a private home, not in a deed-restricted neighborhood, and they do not have an HOA.

County Circuit Judge William G. Law ruled a month ago that he couldn’t stop the city from imposing fines, but granted a stay in any enforcement, so the fines will continue to add up, reports WFTV.

City officials hate the mural so much that they are considering putting a lien on the property to “motivate” them to paint over it. We tried to contact Code Enforcement Officer Cindy Sommer at (352) 735-7127 to ask some questions, but she never called us back. WTFF News is trying to figure out who exactly is behind the attack on this mural. It’s probably just a few uptight knuckleheads who moved to Florida and want to desecrate our beautiful state with their hateful absurdity. They could just choose to ignore the mural, as it does NOT violate Florida Statutes. They choose to not reveal themselves, opting to hide behind obscurity of “policy.” For now, we can only refer to “them” as the Mount Dora “city officials,” or “city council.”

The ironic thing is that Mount Dora is an artsy town, and brings in lots of tourism dollars for that very reason. Just last weekend they had their “Mount Dora Art Festival,” which was ranked Number 7 in the nation for Best Fine Art Show.

Facebook reviews are showing up on the City of Mount Dora page in support of the mural:

“It’s an artistic town and here we are fighting the city for this art mural,” said the artist, Richard Barrenechea. 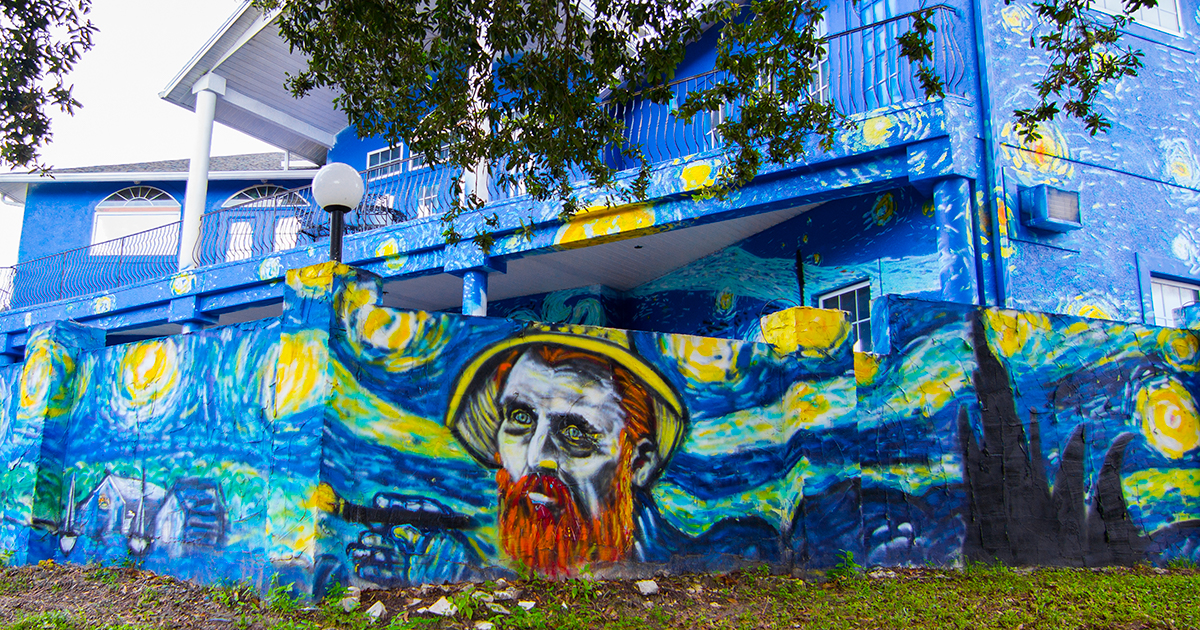 The homeowners’ attorney Jeremy Talcott, with Pacific Legal Foundation, said he will file an opening brief in court next week to challenge the city’s fine. (dailycommercial.com)

Mount Dora City Officials only enforce the codes when they want to. For example, this “Main Street Leasing” sign remains undisturbed: 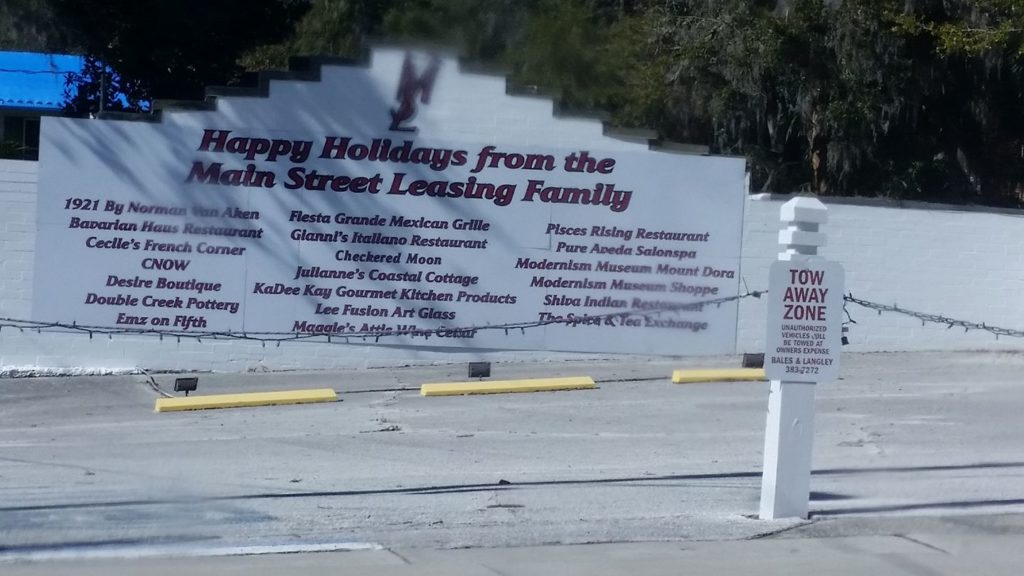 “When a statute is that broad it gives almost unlimited discretion to the city to kind of pick and choose who they want to enforce it against, which is exactly what has happened here.” Talcott said. “Other murals in Mount Dora are being ignored while the mural on this house is being targeted. I think that raises concerns of equal protection as well.”

“We thought this was an art community. We thought we were giving them a gift. Instead, this is a nightmare. I feel like I am back in communist Poland behind the Iron Curtain,” said homeowner Ludomir Jastrzebski. “The city has no clear legal rules against murals. They are making them up as they go along and I want to know why.”

Ludomir and Nancy have an adult son who is autistic, and the mural means a lot to him. They refuse to give in to the bullying techniques.

“We will continue to fight this to the end.” 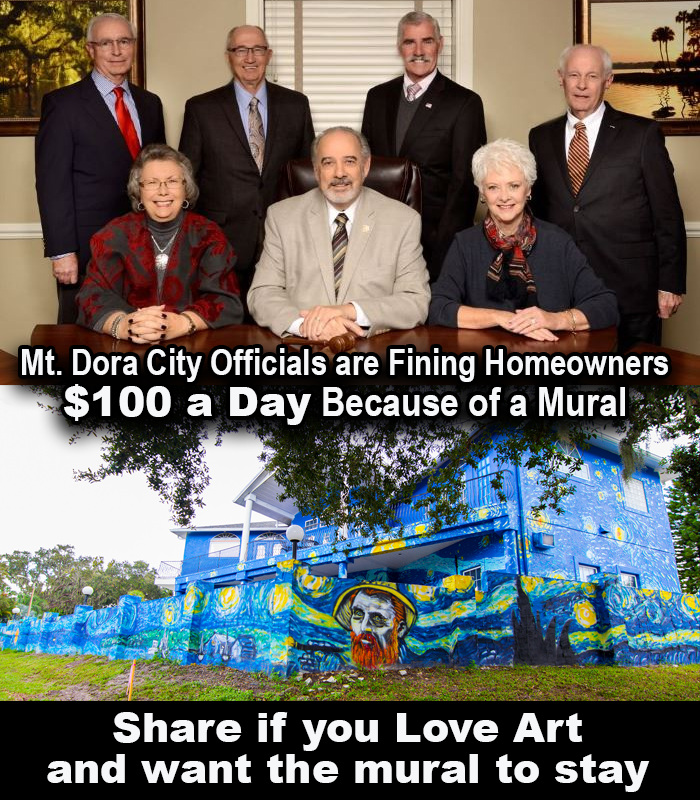 Let Magistrate David Tegeler and City Council members Nick Girone, Cathy Hoechst, Laurie Tillett, Cal Rolfson, John Tucker, Marc Crail, and Harmon Massey know that we are in support of the “Starry Night” mural, and they have no right to attack it.

Keep them in mind next election.

Praying for this homeowner this is ludicrous doesn’t Mt Dora have more pressing matters to indulge in. I think it’s quite a piece of art especially for a community that prides itself as being an artistic community. Think I’m gonna stop supporting the businesses there.

I would like to know how this mural is a sign? Can the council please explain. I say call the city council and demand answers. This is bullying, pure and simple. This house represents everything Mount Dora is. . .or at least was.

Shame,shame, shame on u Mt.dora for allowing this persecution of our fellow artists committed to improving the quality of our lives thru artistic expression.

I think the city councilman are very greedy I’m sure they would not like someone telling them how to paint there home.T hear people paid for there own home not the councilman idiots or the city; I just think it is all so wrong in every aspect

It’s their home they should be able to decorate it how they like. Just because the council doesn’t like it doesn’t mean the owners should be forced to remove it. It also seems like not only a bully tactic to control but also s scam for this corrupt city council to make money. If this is how the council behaves I hope they are all voted out of their seats. We all have different opinions, just cause I or whoever doesn’t like something doesn’t give me or anyone else the right to infringe on their right to do as they please with what they own. Though I do happen to like the mural. But if I didn’t do what, it’s their property.

Personally I love the artistic vibe! Safety Harbor has art and murals on their buildings and tourists flock to the area to see them. Why are they attacking these people for art that is tastefully done? This country has become too uptight trying to control every aspect of our lives. Relax people…there is plenty of GOOD to go around. The painted house makes me smile! Stop focusing on the negative….enjoy the art! In the meantime…I’m boycotting Mount Dora.

Boycott Mount Dora ..My wife and I frequently enjoy visiting Mount Dora with friends for the cultural experiences, wonderful small shops and dining. But in support of Starry Night we feel that city council totally wrong and will not be spending our time and money in a town whose council are bullying the creators of Starry Night and to boycott all Mount Dora’s activities and tourism.