Riverview (WTFF) –  A high school student has stirred up controversy with a sign reading “If I was black, I’d be picking cotton, but I’m white, so I’m picking u 4 prom.” 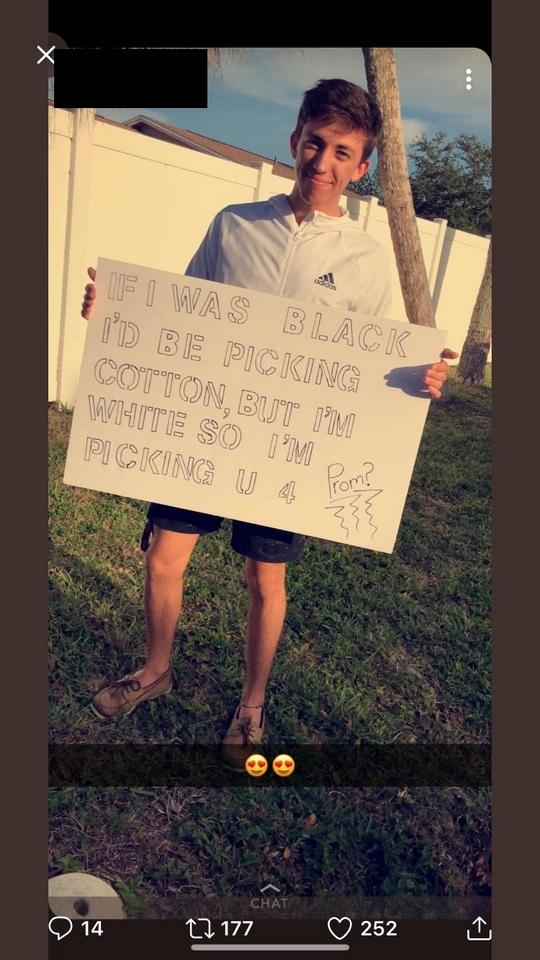 The 18-year-old Riverview High student in the photo is Noah Crowley. The Herald Tribune reports that administrators have been speaking to the students and his parents on the phone since Sunday evening, when the Snapchat screenshot went somewhat viral on Twitter.

This is not exemplary of most Floridians. Riverview senior Anton Kernohan said that everyone he talked to at his school was “disgusted” with the sign.

Erin Williams, another student, made a Facebook post revealing some ugly truths about the racism still present in our Florida schools:

Riverview has been recently going through a “race war” for the past couple of weeks, my best friend and I have been dealing with a girl who has been repeatedly calling us a nigger and an “uneducated black bitch” which she has openly said she was racist. Resulting in us getting in trouble by administration because they fear we’re going to put our hands on her. One administrator has even told us that “ it’s her right to speak how she wants too”. The boy in the picture has caused disruption besides this one where he threw a banana at a mixed boy and told him to “go fetch”. And a few white boys have ganged up on a couple of black kids going to snapchat calling them niggers and monkeys. All of which RIVERVIEW STAFF and administration knows about and has done nothing. They’re letting these kids walk freely around expressing racism and told us “if you touch anyone, we will suspend you and not let you graduate” this is what riverview high school is letting their students do, and basically telling us black kids to deal with it.

These allegations indicate that some students are becoming emboldened with their racist rhetoric. It could be argued that “kids will be kids” and these are just “stupid jokes,” but given the fact that the United States has received warnings from the UN concerning their rampant racism, it’s not that simple. The murder in Charlottesville is just one example of how toxic movements like “Unite the Right” are radicalizing racists and threatening our peace. All big problems start as small problems, so this hateful, racist rhetoric must be dealt with directly.

The school district predictably released a statement saying they do not “support or condone” the post’s message:

Although this message is one student’s opinion, we take the matter of racial relations and school safety seriously, and we look forward to working with our students and these outside groups to have a meaningful and informative dialogue and expanded curriculum related to this important national topic.

Noah’s photo could just be a case of “trolling” in real life, not that it lessens the ugliness or harm.

Internet users are accustomed to “Edgelords,” defined on Urban Dictionary as someone “who uses shocking and nihilistic speech and opinions that they themselves may or may not actually believe to gain attention and come across as a more dangerous and unique person. Most Edgelords are teenagers trying to seem overly cool and/or over-casually apathetic.”

This isn’t really “news” in the traditional sense, but since there are still people in the world who deny that racism exists, articles like this provide a much needed pathway for them to engage with reality.

For the majority of us who understand that racism is still a problem in our country, let’s not get hung up on idiots like Noah when there are more serious racial issues to examine and fix… Like the fact that “nearly half the counties in Florida sentence blacks convicted of felony drug possession to more than double the time of whites, even when their backgrounds are the same,” as The Herald Tribune reports.

Extend the rules of the internet to real life, and DO NOT FEED THE TROLLS. Not only will your mental health benefit from shunning insanity, but you can use your brain power to solve real issues instead of falling into frustrating traps of delusion and hate. That being said, we should still call out these fools, and stand in solidarity against hatred and bigotry. Just don’t let the hate turn into more hate.

Prom will take place on May 5 at the Hyatt Regency Sarasota. The district hasn’t decided if disciplinary actions will be taken against Noah.