Back in the 70’s a Florida man fell in love with a dolphin named Dolly.

Malcolm Brenner described the experience as “almost spiritual” in a VICE article. He met the dolphin on a freelance photography assignment at Floridaland, a theme park in Sarasota. Back then he was a student at the New College of Florida.

“Female dolphins are very assertive about their sexuality,” said Brenner to the VICE reporter.

He’s now starring in a documentary called “Dolphin Lover,” a 15-minute film that tells the story of “his summer long love affair with Dolly the dolphin” over four decades ago. 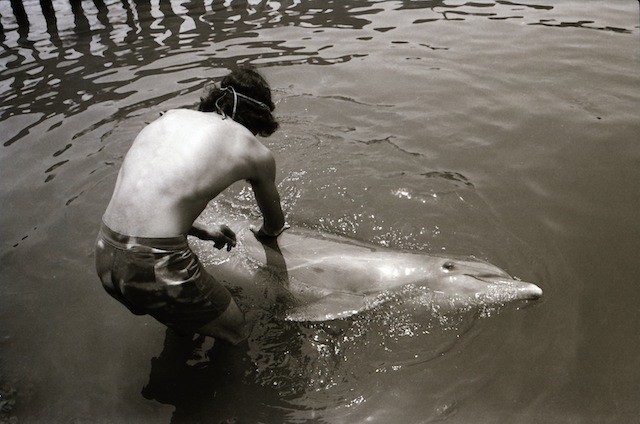 Brenner lives in West Florida these day and tries to live a pretty normal life. He even has a grown daughter after “‘training’ himself to like women.” He hopes that one day zoophilia will be normal in society. He seems to like humans too, as he’s active on several dating sites.

Back in the day, it was totally legal to fuck animals in Florida. Back when America was great?

Bestiality could be banned in Fla. following goat rape

A goat fucking incident in 2008 paved the way for a new law in 2011 that outlawed humans fucking animals in the Sunshine State.

FSS 828.126 basically declares that humans are not allowed to “knowingly engage in any sexual conduct or sexual contact with an animal.”

It’s an important law to have on the books to protect animals, but it’s only a first degree misdemeanor.

“Laws barring bestiality, such as the one recently enacted in Florida, are not wrongful limitations of sexual freedom. They rightfully protect the sexual liberties of all,” reads a Guardian article.

That pretty much says it.

Please stop fucking animals, everyone. We shouldn’t have to ask these things. Also, it’s not just Floridians. Margaret Lovatt apparently fell in love with a dolphin too.

Gee, I guess it’s very difficult for people to accept that dolphins have a sex drive and a brain and can figure things out. Dolly’s courtship of me didn’t leave anything to the imagination. It’s amazing to me that people who weren’t there have this all figured out!

Life was going well and your posts keep me laughing…until this dolphin fucker….Sonny, you stole my innocence and this article has ruined my life….

I’ve heard of “waxing the dolphin” but never of actually fucking one….I would have liked to see this freak fuck a killer whale….the sick marine life fapper….