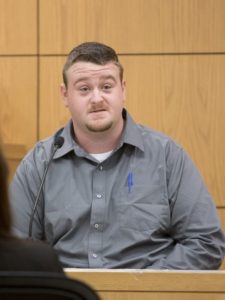 Hubbard, 23, told the jury there was no truth to the allegations he caused such severe vaginal trauma to his 80-pound pit bull mix, Baby Girl, that the dog limped and had trouble moving.

The jury reached its verdict after about two hours of deliberations Thursday. Hubbard has not been in custody during court proceedings.

Hubbard was charged in January after his father’s girlfriend, Melissa Parsons, reported the alleged sexual acts to police. Escambia County Animal Control took Baby Girl into custody and has had her since then.

During the trial, veterinarian Andy Hillman testified when he examined Baby Girl on Dec. 30 — roughly a week after the animal was traumatized — the dog was so aggressive he had to sedate her before he could proceed. He said she had severe genital trauma, but there was no evidence of semen inside the animal. He said the condition she was in would have been very painful both at the time it was inflicted and in healing.

Parsons cried as she testified, saying she physically saw the dog being abused around Dec. 19, and when Hubbard dragged Baby Girl by the collar into his room again a few days later, she said she tried to stop the abuse.

It was then she said she called the Escambia County Sheriff’s Office, who in turn called animal control. One responding officer from each agency testified Thursday, saying Hubbard was aggressive when confronted about the allegation.

The court also heard testimony that Parsons and the Hubbard family had issues. Parsons admitted she had a prior felony conviction and a charge for making a false official statement, and defense attorney Gene Mitchell told the jury that, essentially, the whole case tying Hubbard to the dog’s trauma hinged on Parsons’ allegations.

There is evidence the animal was traumatized, but Mitchell claimed the “despicable” acts didn’t originate with his client. Hubbard’s father testified Baby Girl and another dog in the home, a miniature pinscher, often got loose and wandered around the neighborhood.

Hubbard himself testified he hadn’t been living in the home during the time of the abuse, and said he had just moved in with his girlfriend but came and went back to the house during that time.

Witnesses also testified Hubbard had recently had surgery for a broken hand, meaning his arm was in a cast during the time the alleged assault took place. For that reason, Hubbard said, it would have been impossible for him to manhandle an 80-pound dog.

What happens to Baby Girl now?

The pit bull involved in the case has been in the custody of Escambia County Animal Control since Hubbard’s initial arrest in January. Now that the man has been found not guilty of the charges, an Escambia County spokeswoman said the county is waiting on further direction from the legal department on next steps for the dog’s custody. There isn’t a specific time frame to resolve the issue, but the spokeswoman said the legal team has been working on the issue since earlier this week.

As reported by the Pensacola News Journal

What can we do to prevent animal abuse?

If you live in the Bradenton/Sarasota area, join Stand Up Bark Back SRQ.