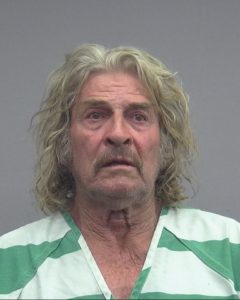 Gainesville (WTFF) – A Florida transient was arrested on Thursday for a couple death threats he made back in 2016.

One of the victims is Evelynn Foxx. She’s the President of the Gainesville NAACP.

In November of 2016, Ronald Wadford reportedly called her five times from a blocked number. She was 65 at the time, according to court documents.

During the phone conversation, he said he was with the KKK.

“I’m going to hang your nigger ass,” he told her.

He also called another black female victim, 67 years old, and threatened her life while cursing and using racial slurs. Those called were also made five times during that month, though on different days and times.

Also, on July 3, 2017, someone threw a “rebel flag” into Foxx’s front yard, according to a press release.

Gainesville Police spoke to a witness who received 30 unblocked calls from Ronald. He said he’s known him over three years and spent a lot of time with him.

He said Ronald is “very ‘racist’ and has a lot of ‘hate and violence in his heart.'” Ronald reportedly “collects knives and machetes and has spoken of ‘going out in a blaze of glory.'”

Ronald Wadford is listed as homeless. He recently had a birthday on August 7.

On Thursday, the 9th, he was seen walking around Downtown Gainesville. Det. Decastro spotted him and Wadford was arrested.