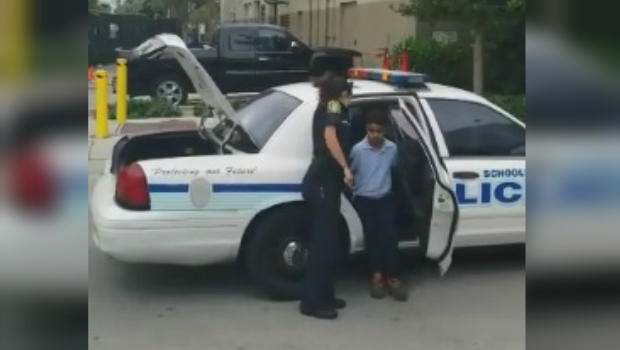 Miami (WTFF) Some little 7-year-old shit beat up his teacher at school. He punched her, kicked her, and when they fell to the ground he grabbed her hair and pulled. He did this because she told him to stop playing with his food.

As a result, he was placed into handcuffs and removed from the school. This is the second time this school year since the first-grader had to be restrained because of violent behavior, according to nwfdailynews.com. He was punching students and staff back in November, according to NBC Miami.

A video of the arrest sent social media retards into a frenzy, with many comments bitching about “how could you arrest a kid!?” and other emotional nonsense like that.

This “crying wolf” symptom tends to downplay actual civil rights issues, and ridicules serious problems in society, causing people to lose interest in real problems, and to deflect all problems as nonexistent.

Later on, Florida Boy was Baker Acted, according to CBS News.

Everybody’s full of shit these days though, not just random people defending some 2018 Dennis the Menace caught on video getting arrested long after he assaulted a woman. Everybody’s crazy, not just the die-hard conservatives who actually believe that cops aren’t allowed to arrest kids anymore. And everybody brings drama, because the teacher is planning to press charges against the kid now, according to NBC Miami, making this whole thing a tiny bit more ridiculous.