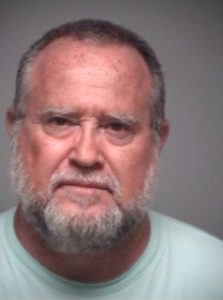 LEESBURG — Police on Friday arrested a man who a witness claimed he saw standing naked by the Leesburg Post Office trying to lure a cat out of the woods.

According to an arrest report, the witness told officers he saw Arnaz Gene McVay, 64, standing by the woods next to the Post Office on South 14th Street about 9:30 a.m. He said it appeared McVay had a handful of cat food and was trying to coax a cat out of the woods.

When the white cat emerged, McVay reportedly grabbed it and appeared to be trying to have sex with the cat. The witness said he confronted McVay and the men began to argue. The man said at some point McVay put on his shorts and rode off on a bike.

Officers found McVay down the block. He reportedly denied being naked but said he removed his shirt because he was hot from riding his bike. He did admit showing his backside to the man who confronted him, however.

McVay, of Leesburg, was charged with exposing his sexual organs.