DAYTONA BEACH — A homeless man stole a forklift from behind a Best Buy store, moved some large boxes to a neighboring parking lot and then took the machine for a spin on Williamson Boulevard, police said.

After a Daytona Beach police officer stopped him and asked him what he was doing, Bradley Barefoot said he wanted to drive because it was better than walking, according to the arrest report.

Barefoot was driving the forklift around 4 a.m., although the machine had no lights on and it wasn’t street legal, the report said.

Barefoot, 43, was charged with one count of grand theft. He is being held on $5,000 bail at the Volusia County Branch Jail. 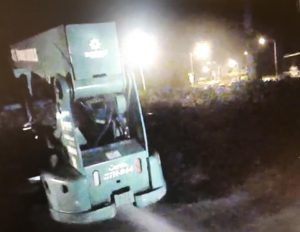 During the early morning hours on Saturday, Barefoot took the vehicle — a Sunbelt Rental, Genie Telehandler GTH-844 — from behind the Best Buy at 1900 W. International Speedway Blvd., police said. After stealing it, he used the forklift to remove large boxes containing unknown items from an area behind the Best Buy and brought them to the Bob Evans at 2000 W. International Speedway Blvd., according to the report.

Barefoot told police he inspected the boxes, but determined they had no value so he left them in the parking lot. That was when he took the forklift out for a drive, the report stated.

The forklift was valued at $45,000, police said. It has the capacity to lift 8,000 pounds to a maximum height of 44 feet and weighs more than 11 tons, according to online retailers.

Barefoot has numerous felony and misdemeanor arrests on his record — a total of nine since December 2015. In many cases, he was arrested in the vicinity of West International Speedway, according to police reports.

In February 2016, he was arrested on allegations he had ordered a beer at Ker’s Winghouse in Daytona Beach and tried to pay for it using an expired credit card that belonged to someone else.

His other arrests have been on charges ranging from disorderly conduct to armed burglary, records show.