DAYTONA BEACH — A Daytona Beach man is banned from Volusia County beaches for six months after the mother of a teenager told officers he was giving out a business card that read, “Sugardaddy seeking his sugarbaby.”

Richard Basaraba, 73, was not charged with a crime and told police he had been passing out business cards Saturday to young females on the beach who all were older than 18. Officials are making Basaraba stay off beaches and walkovers because he gave out business cards, a violation of a Volusia County ordinance that prohibits soliciting on the beach.

In an interview at his beachside condo Wednesday, Basaraba said he had no nefarious intentions toward the girls and was “devastated” by what he considers an overreaction from law enforcement.

On Saturday, a 16-year-old Oviedo girl told Beach Safety Ocean Rescue officers that Basaraba approached her and two 18-year-old friends and handed one of her friends a business card that read, “Sugardaddy seeking his sugarbaby,” a report states.

The card featured a photo of a young girl sitting on the lap of an older man in a business suit, along with an email address and the accompanying text, “Ask me about your monthly allowance.”

The girl and her mother, Karolina Seaman, gave statements to Beach Safety officers. The teenager told officers that after Basaraba learned the girls’ ages, he held up a bra pad and said he was looking for someone to fill it. He told the 16-year-old she “would be perfect,” adding that she should contact him when she turned 18, the report states.

The girl’s mother did not return phone messages left Wednesday.

Basaraba was contrite when he spoke to The News-Journal.

“I’m really upset about it. This really knocked me for a loop,” he said, adding that it was all a misunderstanding.

Basaraba said he recently ordered a T-shirt that reads, “Accepting application 4A sugar baby” to wear during his daily walks on the beach. The shirt had proven a conversation starter, he said. 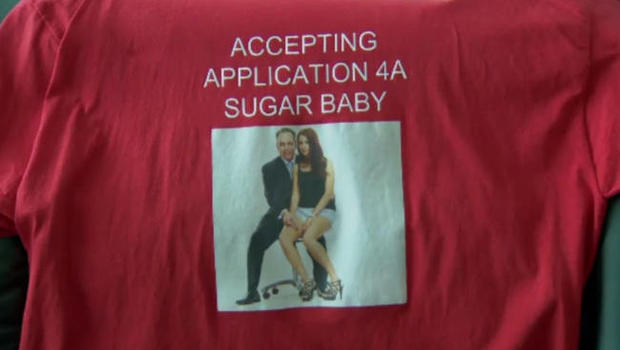 “I’ve had women stop me and say, ‘I want to take a picture with you in this shirt.’ They want to put them on Facebook,” said Basaraba.

He, too, posted some of the photos on his Facebook page.

“Anything I’ve ever posted only gets three or four likes. I posted this (photo of me posing with a woman in a bikini) and got 78 likes,” he said.

He ordered business cards that included an email address about a week-and-a-half ago to match his shirt, he said, using a stock image he found online. He only gave out five or six but did not receive any emails.

How would he respond if someone wrote to him in search of a sugar daddy? “That’s a good question. I don’t know,” he said, adding that he has deleted the email account and related Facebook posts and trashed the business cards.

On a recent beach walk, he found a bra pad, which he keeps in a basket on a living room shelf. “It gave me an excuse to talk to women,” Basaraba said.

He said he would hold up the bra pad to “busty” women and say, “Obviously this isn’t you,” and then turn to a smaller woman and say, “This might fit you,” he said.

“Ninety-five percent of women found it hilarious. Maybe the younger ones didn’t as much but the older ones did,” he said.

“I did not approach them. They stopped me,” he said of the teenagers. “One very important point — the card was given to another woman who was 18,” not to the 16-year-old.

“I engaged (the younger girl) before I knew she was 16 because of her bust size. I did make the mistake of saying, ‘You’re the cutest one here. Call me when you’re 18,’” he said.

Basaraba insisted he was not trying to entice the girls into anything inappropriate.

Basaraba, a retired engineer with a daughter and granddaughter who live out of town, said his wife of 37 years passed away in 2003 and he hasn’t remarried.

If given the opportunity, he said he would like to apologize to the teenager and her mother. “I am so embarrassed,” he said. “I’m still getting over it. I understand the mother getting upset.”

Beach Safety spokeswoman Capt. Tammy Marris said Basaraba wasn’t arrested because police did not witness him passing out business cards. Instead, he was banned from all beaches and walkovers for six months with what’s known as a trespass order.

Trespassing “happens quite often,” she said. “I would say a couple times a week, probably.”

She said when Beach Safety officers respond to incidents on the beach, they access a trespass database. Violation of a trespass order will result in arrest.

Florida Boy Strangles His Mom, Buries Her at a Church, Stages Fake Burglary with Friends