In response to this article: Publix Engages in Memetic Warfare – 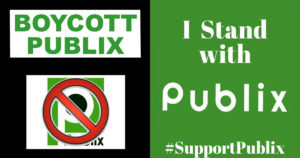 So let me get this correct, you’re going to boycott Publix because they contributed $310,000 to Adam Putnam?

Well guess you are also going to boycott Disney World, they donated directly to Adam Putnam too. Also, time to boycott Universal Resorts.

No more sweet tea for you, why, because U.S. Sugar (donated $200,000 to Adam Putnam), No more beer for you either because Anheuser-Busch (donated $147,000 to Adam Putnam), Hungry for dinner after all this boycotting, well OSI Restaurants also directly supports Adam Putnam, who is OSI? Well they own Outback Steakhouse, Carrabba’s Italian Grill, Bonefish Grill, Fleming’s Prime Steakhouse & Wine Bar. Better get boycotting…..

Awe can’t find anything good to eat because all the good restaurants are also indrect supporters of Adam Putnam and the NRA, you better skip dessert, Blue Bell Creamery directly supports Adam Putnam.

Don’t drink any Pepsi Products, no Pepsi, Mountain Dew, Gatorade, Lipton Tea OR Aquafina water. And for those that are quick to forget, Pepsi owns Quaker Oats, Tropicana, Doritos, Lays, Ruffles and more.

Still driving around, don’t stop at WaWa or RaceTrac.. Got to boycott them too. Got into a car crash on you way home from boycotting? Make sure to ask your Ambulance crew to take you to a non HCA Hospital (donated $125,000 to Adam Putnam), oh you have a non HCA Hospital in your area. Cool.

Anyone in Central Florida has heard of Lakeland Regional Health (LRMC) actually LRH is very well known, because it is the busiest SINGLE Emergency Department in all of the United States… You’re in luck… LRH is not an HCA Hospital… Cool… Nope sorry, you have to boycott that place too. The newest wing there is named after Carol Barnett, and she too is a Putnam, supporter.

Do you have Humana Insurance? Well if so, there is no need to go to the hospital. Humana directly supports Adam Putnam… Let me guess you have Florida Blue? Betcha got Blue Cross and Blue Shield sorry kiddo, time to boycott them too. So get off that stretcher and walk your broke ass home.

Need an attorney after the car crash, check the list, make sure you get one that didn’t donate Adam Putnam.

Hot from walking home after your car crash and you have Humana Insurance or only HCA Hospitals in you area… Well don’t even think about reaching up to drop the temperature on your thermostat, there’s about a 50% chance you have a Honeywell Thermostat…. And Honeywell is a direct supporter of Adam Putnam.

Darn, can’t touch the Thermostat… Grab a fan….. Just plug it into the outlet… Nope can’t do that either. It’s time to turn off your power, boycott Florida Power & Light (donated $300,000 to Adam Putnam), I hear it now, I don’t have FP&L, well are you a TECO customer? How about Duke Energy, Time to boycott them too. They donated to Adam Putnam.

Oh you got a generator.. Perfect flip on the TV and just rest for a bit. What’s on cable… Well it depends, do you have Comcast Cable? If so, ….then not a damn thing is on. Cause your going to have to boycott Comcast, they are a direct supporter of Adam Putnam. Okay, turning your TV off, you will just use the internet, sounds legit, quick side note, did you know that Xfinity Wi-Fi is owned by Comcast….. Don’t have Comcast… Cool… Remember NBC Universal. No NBC, CNBC, MSNBC, Hulu, E!, The Weather Channel , USA Network, Golf Channel, Telemundo.

But wait there’s more… as if we need it…

At work do you use any computer programs from ORACLE…… well guess what? You don’t have to go to work anymore.
Do you shop at Macy’s?
Do you have a Master Card?
Do you use CellularONE or ClearTalk?
Need to send money fast.. Western Union… Because all of those companies work with Syniverse Technology…. And our good friends at Syniverse donated directly to Adam Putnam……

Seriously people grow up. I bet every single person inside the store yelling “Boycott Publix…..” uses or has used products, services, food or entertainment from one of the companies above that has directly or indirectly supported Adam Putnam and or the NRA .

Please share this for the fools laying in the isles at Publix. It will give them something to read while they are on the ground pouting like a 2 year old.

To all the Publix Managers and associates. Print out this list, and ask the cry babies if they can leave to boycott all the other places that need boycotting too. Remind them if they have kids to trash any Disney products they have at the house….

Another Facebook user said it would be funny if all the loyal Publix customers had a hand full of sugar packages with them.. Open one up and let it spill on every person you have to step over…. He called it “sweet payback.”

It is funny, but not worth it.

Have to start somewhere.