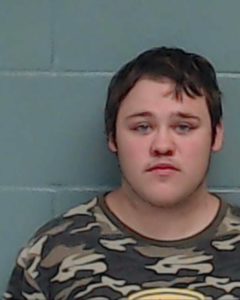 The Florida sun is a double-edged sword. On the bright side, our winters are amazing. On the even brighter side, it can literally kill you.

20-year-old Dillon Roberts is a Florida Man whose brains have been melted by the intense heat.

He lives in a town called Malone. The entire town is barely over 3 square miles.

On October 11, he drove himself to a Hardee’s restaurant in Chipley, along with his young child.

Sex education is frowned upon in Florida, so Florida couples usually makes lot of accidental babies who, if they stay alive for any amount of time, usually end up on our website as Florida Mans themselves.

Dillon parked his car in front of Hardee’s and waddled his fat ass into the fast food joint, leaving his Florida Boy inside the car.

The outside temperature was well over 90 degrees, meaning the inside of the car could have easily been 100+ degrees.

He ordered a bunch of food, sat down in the air-conditioned restaurant, and engorged himself with the genetically modified meat for about 30 minutes. His belly swelling with delight, he completely forgot about his young child…

…The same young child that was sweating away inside the car. His face was bright red, and his clothes were drenched in sweat as his life was being slowly choked away by the incredible heat.

Luckily, someone spotted the poor kid. This person must have been a transplant not yet affected by the heat, because they were smart enough to call the cops.

When a Washington County Sheriff’s Office deputy arrived, they found Dillon and his kid inside the restaurant. The father must have known what was going on and pulled the kid inside to play innocent. Problem is, the kid was already drenched in sweat and looked like he was going to die.

Dillon did what all Florida Mans do when presented with rational conversation and got angry.

He yelled at the cop:

“What’s the big deal? I cracked the window!”

He was referring to the two back windows that were ever so slightly opened.

He was arrested, taken to the Washington County Jail, and charged with cruelty towards a child, according to Facebook post made by them.

The arresting officer, Sheriff Crews states, “I cannot express enough how grateful we are that calls were made by citizens who were concerned for the well-being of this child and we urge everyone to report any concerning or inappropriate behaviors involving children.”

Seriously. If you see a kid or a pet stuck in a car with no a/c in Florida, call the cops and save a life. Break the windows open if you have to. Do something.

Florida dad threatens to blow up school in Chipley

All in Washington County