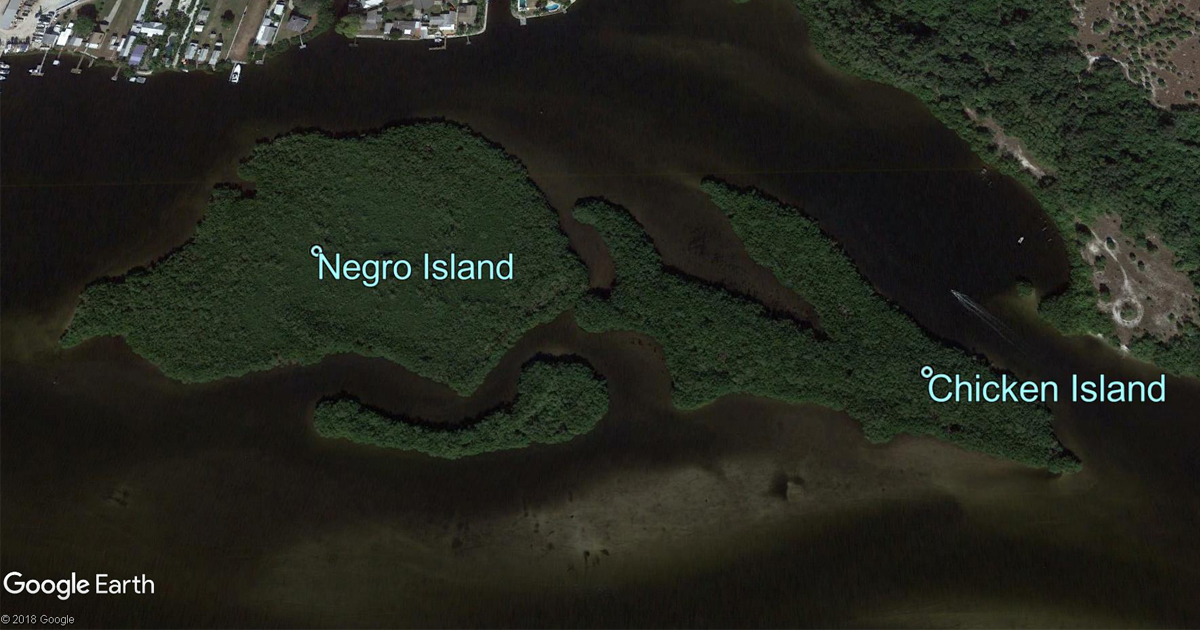 There’s a pair of islands in the Tampa Bay named “Negro Island” and “Chicken Island,” and they’re right next to each other.

The islands are zoned in Ruskin, an unincorporated census-designated place in Hillsborough County that was “founded” on August 7, 1908 and named by the English writer John Ruskin (Wikipedia).

Googling yields very little information on the history of the two islands, or how they got their names.

It’s possible that Negro island was home to a “Maroon Community,” where revolted slaves and the Black Seminoles would gather to form towns. In the United States, there has been a concerted effort to suppress information on slave revolts and maroon activity, unlike other Caribbean nations like Jamaica and Haiti where slave revolts were well documented. As a result, much of the history has been lost.

The Geographic Names Information System (GNIS) has no real history on Negro Island, other than the fact that surveyors found the name on some old topographical maps. Same with Chicken Island.

There’s also a Negro Island in Citrus County, but it doesn’t neighbor any deliciously named islands like the Hillsborough pair. The book “African American Sites in Florida” by Kevin M. McCarthy simply says that it was “popular with African Americans.” The book states that “when local officials realized how offensive the name might be to African Americans, they changed it to Horseshoe Island.” The USGS rebukes that last statement, saying that “a proposal to change the island’s name to Horseshoe Island was rejected in October 2011.”

If anyone has historical information on the islands, especially on how they got their names, please leave a comment below.

I found this in a publication from USF https://scholarcommons.usf.edu/cgi/viewcontent.cgi?referer=https://www.google.com/&httpsredir=1&article=3532&context=flstud_pub page 8 Very likely is Negro Island as it is in Tampa Bay THE “SARRAZOTA, OR RUNAWAY NEGRO PLANTATIONS”: TAMPA BAY’S FIRST BLACK COMMUNITY, 1812-1821 by Canter Brown, Jr. * In April 1822 a resident of St. Augustine penned a lengthly account of recent events in the new Territory of Florida for the readers of a Boston newspaper. In so doing he hinted at an intriguing tale of enterprise, courage, and tragedy which occurred in the Tampa Bay area early in the nineteenth century. That tale, still largely unreported and almost forgotten, involved hundreds of black men, women, and children who yearned for the freedom afforded them by the relatively uninhabited lower Gulf coast. It also included southern slaveholders anxious for the enslavement of those blacks, and it featured bands of Coweta Creek Indians, desirous of the rewards that the favor of those slaveholders could provide. The St. Augustine resident, Charles Vignoles, wrote in 1822: The indians and negroes have been lately so connected with events in Florida, that a few observations, so far as they have been concerned, may perhaps be not unnecessary. The latter wars made by the Indians upon the United States having compelled the government to coercive measures, ending in the total defeat of Creeks, Choctaws, Alabamas and other hostile nations, many of the chiefs, most prominent in their depredations, fled away, and traversing the Seminole nation, settled themselves about Tampa Bay, Charlotte Harbor and their waters. The remnant of the black and colored people, who had served with Col. Nichols during the war, fugitive slaves from all the southern states, as well as from the Spanish plantations in Florida, followed up the steps of the Indians and formed considerable settlements on the waters of Tampa Bay. When the Indians went in pursuit of these negroes, such as escaped made their way down to Cape Florida and the Reef, where they were collected, within a year past, to the number… Read more »

As long as black people look for any signs of injustice, they will remain mentally enslaved.

This is what Kanye West was trying to say.

We are one race, started in the same place.

Grow up white and black people.

Stop fighting, love each other