The court applied the Anderson-Burdick balancing test for equal protection claims, and also applied a Twenty-Sixth Amendment analysis, reports Election Law Blog, who published the court order as a PDF:

The document declares that Ken Detzner’s move to block early voting at at state college and university campuses is “discriminatory on account of age,” and also “imposes significant burdens on Plaintiffs’ rights weighted against imprecise, insufficiently weighty government interests.”

Six current or former students at UF and Florida State brought the lawsuit, backed by the Andrew Goodman Foundation and the League of Women Voters of Florida, reports the Tampa Bay Times.

When Ken Detzner was confirmed by Rick Scott on January 18, 2012, he ironically told members of the Ethics and Rules panel that one of his priorities was to “run elections in Florida so that every eligible voter in Florida gets a chance to vote, and that their votes are counted.” (wfsu.org) 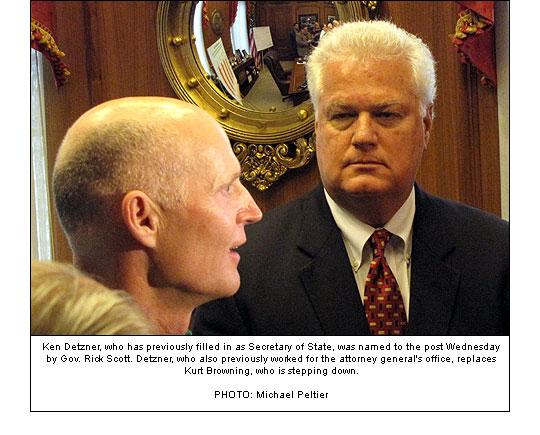 Detzner also served as Secretary of State under Gov. Jeb Bush in 2002, and left the position in 2003. There are no term limits for the office of secretary of state.

Florida Politics writer Joe Henderson described the effort to prohibit young people from voting as “tacky.” He cited a part of the court document stating: “This Court can conceive of fewer ham-handed efforts to abridge the youth vote than Defendant’s affirmative prohibition of on-campus early voting.”

This ruling is a victory for American citizens. The public should keep watch as lawmakers and politicians continue to threaten what’s left of our democracy.

Good, fuck that old piece of shit. Rick Scott and his team are trying to abuse their power, but the Constitution is more powerful.