Tampa (WTFF) – It’s hard to believe that Trump supporters are even real. Either these red hatters are paid to feign stupidity so the media can irritate rational people and continue the drama, or the simulation we’re living in is broken. People can’t be this stupid. They just can’t be… or can they?

Just watch these interviews from a MAGA rally in Tampa on July 31, 2018.

It’s not worth trying to discuss policy with these people. Facts and logic mean nothing to them. They will tell you things like “I heard on Fox News the other day that the economy is booming, so libs can suck it!” That’s the extent of their logic. The rich elite exploit their gullibility and continue writing Republican policies that hurt these low-income white rural Republican voters.

They’re loud and proud right now, these victims of memetic warfare and propaganda. It’s best to just ignore them. Trying to understand them or reason with them is a waste of valuable time. Listening to their angry, delusional rants can ruin your day.

They aimed abuse at Jim Acosta with middle fingers and swear words.

Just a sample of the sad scene we faced at the Trump rally in Tampa. I’m very worried that the hostility whipped up by Trump and some in conservative media will result in somebody getting hurt. We should not treat our fellow Americans this way. The press is not the enemy. pic.twitter.com/IhSRw5Ui3R

Trump is grandiose, deceitful and paranoid. His cult of followers and paid shills have absorbed the insanity, and ceaselessly vomit out the hateful rhetoric. Many of them aren’t even really Trump supporters: 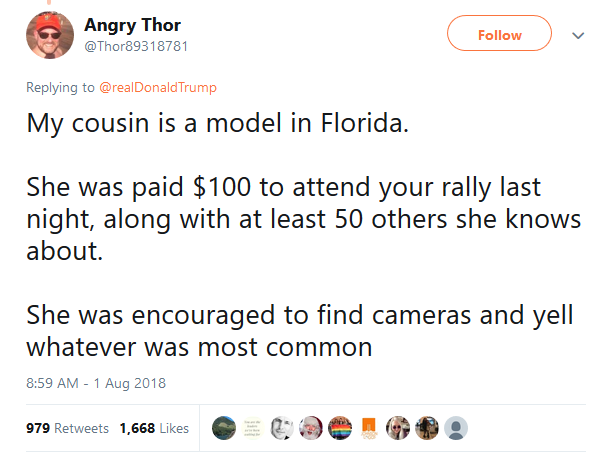 It’s exhausting to keep up with the obvious lies. “There was no collusion,” Trump screams often. “Collusion is not a crime,” continues Giuliani, as evidence of collusion piles up. Putin even admitted to helping Trump get elected on live TV.

“President Putin, did you want President Trump to win the election? And did you direct any of your officials to help him do that?”

The White House did some North Korean dictator style damage control by omitting that reply in their official transcripts. They later fixed it after realizing that people had video evidence.

Trump supporters are treasonous. They support the whims of an imbecile wishing to destroy our democracy. They bastardize Christianity by claiming to believe in a God that’s OK with tearing children away from their parents. They claim moral high ground while supporting an admitted sexual assaulter who’s had three wives. They outwardly express their racism now because they feel emboldened. They believe anything that comes out of Trump’s mouth. They are dangerous because they’re so easy to manipulate.

Why are news stations even reporting on this absurdity? It’s a distraction. It’s nothing of value. It’s emotional nonsense.

It’s all a little funny sometimes too, if we step away from the seriousness of it all.

Like the red hatter proudly spitting out nonsense while wearing a shirt that reads:

Yes, there’s an apostrophe in there. No, there shouldn’t be one.

It’s not funny though, how our country is being damaged by a game show host who tricked the voting majority into this situation via hateful, racist rhetoric. Now that his treasonous actions are on center stage, collusion deniers have ramped up their efforts to remain deaf and blind to the evidence.

It’s extremely frustrating, but we have to focus on what we can do about it. We already know that Trump supporters are delusional, bigoted, ignorant, hateful, and treasonous. That’s been established, and there’s no good reason to keep reporting news that supports this (other than for future generations to look back and think, WTF America?). It’s not like revealing evidence changes the minds of these red hatters.

Legally too, our system has already been compromised. Trump asked if he could pardon himself already. He’s called the press the enemy of the people, just like Hitler said. He’s tried to sabotage every investigation into Russian meddling. We’re way beyond “normal” at this point. The illusion of democracy is withering away.

Trump’s a con man though, and none of what he says has any significance. Hitler actually believed his hateful rhetoric, Trump just spews it because his fans are fucking stupid and easy to dupe.

“I love the poorly educated,” Trump said in Nevada.

In our current situation, a vote for the Republican party is a vote for Russia, bigotry, and backwards behavior.

lmao at your LIBERAL TEARS you mad faggot. TRUMP 2020

Best we will have to a “commoner” in office. Both parties have taken advantage of us. Your eyes will open soon enough. Until then…crawl back to your safespace and QQ

Why Can't You Be Normal?

Every other political party is just as dumb, there’s no non-crazy politicians anymore. The left and right are both just plain stupid