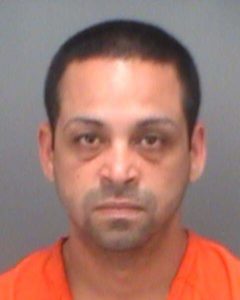 Largo (WTFF) – A Florida man got arrested after allegedly breaking into a jewelry store, accidentally cutting himself during the heist, and bleeding all over the store.

31-year-old Jaime Williams broke into the front door of Silver Queen Jewelry Store on Monday morning he stole $10,000 in jewelry. Later that day he was caught.

He cut himself during the heist and left blood all over the store.

After leaving the store, he hid the jewelry in some bushes.

The arrest affidavit reads: “there was a large amount of blood throughout the scene in the store from defendant injuring himself on the broken glass.”

Officers found the Florida Man several hundred feet from the store, wearing the same clothes, reports Tampa Bay Times. Of course, he was wearing sandals… red sandals, blue shorts, and a gray t-shirt to be exact.

He was covered in blood.

“What are you going to do with my bike?” he asked the officers. Florida Man’s main method of transportation is a bicycle. They also use women with low self-esteem to get transported. On the rare chance they do have a car, they almost never have a license or insurance.

DNA evidence was collected, and Williams was arrested. He went to the Pinellas County jail Tuesday and has a $5,000 bond.