Orlando (WTFF) – A Florida man is in jail after reportedly shooting up the home of someone who left a bad review about the restaurant that his roommate’s mother owns.

42-year-old Norman Auvil allegedly hopped into the passenger seat of an SUV on August 20 and let Michael Johnson drive him to a home on Milford Avenue near Holden and South Orange avenues in Holden Heights.

The victim, Kenneth Walley, spoke to Channel 9 on Friday.

“I actually could feel the air from the bullet as it passed by me,” Walley said. “It missed me by about 4 inches.”

A day earlier, his wife (who is disabled) was denied service at Daybreak Diner on Curry Ford Rd. It was her birthday too. The daughter called the restaurant and spoke to several workers about it. 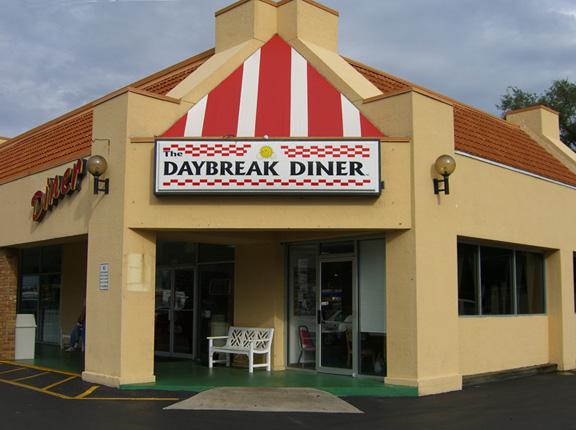 The daughter then left a negative review on their Facebook page and started a social media campaign against the diner, saying they mistreated her mother because of a disability.

Another recent review reads, “I wanted to leave a good review so the owners son wont shoot me too.”

UPDATE: the above links might not work, it appears they either deleted their Facebook page, and/or blocked anyone who left a negative review (which is better than shooting them at least).

Johnson told investigators that on Aug. 20, they were drinking beer with Auvil at the home where they both live. Auvil expressed loyalty to Michael Johnson and Knight.

Auvil was honorably discharged from the U.S. Army.

He told investigators that he drinks beer “most days.”

Johnson wanted to inherit the restaurant one day, so he put his girlfriend to work on finding the negative reviewer’s home address using that fancy Google stuff.

“(Michael) Johnson drove the white Ford Flex while Martin navigated from the back passenger seat and Auvil rode in the front passenger seat,” the report said. “(Michael) Johnson and Martin contend they drove to the Walley residence with the intent to harm someone (via physical fight) or to cause property damage (slashing tires or similar vandalism).”

That’s when the Auvil pulled out his piece and started shooting, reportedly.

The Orange County Clerk of Court is refusing to release the arrest affidavit, so we can’t verify or correct any of these details spat out by Mainstream Media.

Yeah if you look at the pics of the owner’s son, he is a real winner…stupid punk is what he is…hope he comes looking for me…

The Whole World is like the Wild West?
Nope! Mostly just the USA where they are Gun Crazy…
And Florida where they are among the craziest of all the states…
One of the states where it is completely legal to kill someone because you thought they were scary…
A state I won’t be visiting until they get ‘Gun Crazy Under Control’.

Sounds like the Florida pair cucked Auvil into shooting, then made him the fall guy. They should arrest the son, Michael Johnson, and his girlfriend.